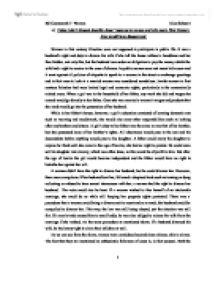 Jesus appointed only men to succeed him therefore women should be excluded from priesthood'.

a) Using Luke's Gospel, describe Jesus' response to women and why many First Century Jews would have disapproved. Women in first century Palestine were not supposed to participate in public life. It was a husband's right and duty to divorce his wife if she left the house without a headdress and her face hidden, not only this, but the husband was under no obligation to pay the money which the wife had a right to receive in the case of divorce. In public women were not meant to be seen and it went against all policies of etiquette to speak to a woman in the street or exchange greetings and in fact even to look at a married woman was considered scandalous. Jewish women in first century Palestine had very limited legal and economic rights, particularly in the economically related areas. When a girl was in the household of her father, any work she did and wages she earned would go directly to her father. Once she was married a woman's wages and products that she made would go into the possession of her husband. While in her father's house, however, a girl's education consisted of learning domestic arts such as weaving and needlework, she would also carry other responsibilities such as looking after any brothers and sisters. A girl's duty to her father was the same as was that of her brother, but she possessed none of her brother's rights. ...read more.

This will, in turn contribute to the faith and knowledge of future generations. If women wish to be more involved with the parish in general rather than the entertainment and education of children, there is a position in the Anglican Church called 'lay reader' which can be taken by a women. She can then help with the running of the parish and preach sermons. Women can act as 'Welcomers', welcoming people into the Church; or can help with the planning of the liturgy. Women can be Eucharistic ministers and participate in the distribution of communion during mass. As Eucharistic ministers, they can also take communion to the sick of the parish that are unable to attend the mass. Even if they are not Eucharistic ministers, women can perform a duty called 'pastoral visiting' which entails visiting the sick or grieved and talking to them to give them comfort and reassurance. This is often quite an unofficial duty, but is certainly a great contribution to the Church as it provides encouragement to people of the parish and helps support their faith. Another path a woman can take to support the Church is chaplaincy. By becoming a chaplain she contributes to the faith of those outside her parish. She could be a chaplain of a school, a university, a hospital and many other places. Chaplaincy includes the helping of others who are in need of comfort or advice, as a chaplain a woman can offer her help to those in need of it. ...read more.

He obviously had his reasons for sticking to men. Male priesthood has gone on for two thousand years and no experiment of female priesthood has lasted, why should this time be any different? Besides, there is nothing wrong with male priesthood, most people are perfectly happy with it the way it is, so why should this be changed now, perhaps causing division? When women were ordained to the Anglican Church in 1994, it resulted in a split in the church. We should learn from our mistakes and not damage things further. What is to say that if we try to ordain women to the catholic Church the same thing will not happen, or even worse. Besides, if women are ordained to priesthood it may result in the undervaluing of the role played by lay women, who do a lot for the church. I am inclined to agree with the point of view that women should be given the right to ordain women. So much has changed since the times of First Century Palestine; there is no reason for this not to change. If women wish to become priests they should not be denied that right. There is so much talk of equality and human rights. The church is always participating greatly in charity events to raise money for those less well off than us, confirming that they believe that all human beings are equal. And yet the Church is denying women the right of being ordained. Surely this is hypocrisy? ?? ?? ?? ?? RS Coursework 1: Women Alice Schurov 1 ...read more.