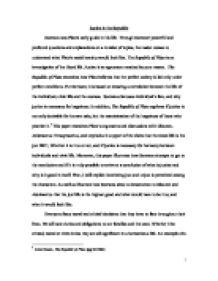 Justice in the Republic. The Republic of Plato examines how Plato believes that the perfect society is led only under perfect conditions .Furthermore; it is based on drawing a correlation between the life of the individual, civic life and the cosmos. So

Justice in the Republic Socrates was Plato's early guide in his life. Through Socrates' powerful and profound questions and explanations on a number of topics, the reader comes to understand what Plato's model society would look like. The Republic of Plato is an investigation of the Good life. Justice is an agreement reached by pure reason. The Republic of Plato examines how Plato believes that the perfect society is led only under perfect conditions .Furthermore; it is based on drawing a correlation between the life of the individual, civic life and the cosmos. Socrates discusses individual's fate, and why justice is necessary for happiness. In addition, The Republic of Plato explores if justice is not only desirable for its own sake, but the maximization of the happiness of those who practice it.1 This paper examines Plato's arguments and discussions with Glaucon, Adiemantus Thrasymachus, and Cephalus in support of the claim that the Good life is the just life? ; Whether it is true or not, and if justice is necessary for harmony between individuals and civic life. Moreover, this paper illustrates how Socrates attempts to get to the conclusion and if it is truly possible to arrive at a conclusion of what is justice and why is it good in itself. First, I will explain how being just and unjust is perceived among the characters. As well as illustrate how Socrates aims to demonstrate to Glaucon and Adeimantus that the just life is the highest good and what would have to be true; and what it would look like. Everyone faces moral and ethical decisions that they have to face throughout their lives. We all have duties and obligations to our families and the state. Whether it be ethical, moral or civic duties they are all significant in a harmonious life. An example of a duty we may have is for e.g. keeping promises or repaying friends back. ...read more.

He uses the story about the Ring of Gyges, it was a ring that you would wear, once worn you would be invisible and you could perform any injustice for your own benefit and not be seen by any individual. This invisibility would give an individual freedom to do what they please and be punished for it. He believes that individuals classify justice in the category that individuals are just in order to benefit themselves. Nature is what dictates the pursuit of an individual's own good. He says that people perceive justice as corruption and that we let ourselves suffer in order to escape a larger corruption. We all can be affected from one another's negligence. Therefore justice is something individuals participate in out of feebleness and uncertainty. Glaucon shapes this argument and shows us that he approves that it is better to be unjust than just. Plato then makes a comparison between the just and unjust person. Both individuals would be given a ring to be invisible and perform unjust acts. Glaucon suggests that "no one, as it would seem, would be so adamant as to stick by justice and bring himself to keep away from what belongs to others and not lay hold of it."10 Therefore, no one is willing to be unjust, unless being compelled too. Glaucon sees that the consideration of justice would be placed in being honourable, therefore it is usually chosen because we feel more dignified. Furthermore, the only way to feel honourable is through recognition from individuals around us. Moreover, believing justice is a pleasant entity is because of the positive feedback we receive. Towards the end of book II, Adiemantus goes against what Glaucon had been arguing. Adiemantus believes that no one praises justice for its own health and knowledge. Being just has its rewards in life and after life. He states that Justice is desirable for joy and happiness. ...read more.

The philosopher is unafraid of to use words, and he is the most virtuous of men; he allows for the association with forms and strives towards the truth. Socrates suggests that the only way to be happy is to measure happiness against anything that does not change. Therefore, the philosopher is not deemed vicious or useless, because the philosopher looks beyond, and sees the forms; he is just, while the sailors are caught up in unjust acts to try to rule. The pilot metaphor helps us understand the sailors are unhappy because they are unjust and the philosopher's happiness exists because he is just. In The Republic of Plato, happiness as suggested by Plato is pure and optimal in order to achieve peace, contentment results from having a perfectly just soul. Furthermore, inner conflict has to be absent from within in order for an individual to prosper and not endure any suffering. This happiness can be acquired by obtaining the virtue of justice, where reason is the director for the soul, making it valuable and good in itself. According to Plato, true happiness arises from within as a result of cultivating the correct state of mind, and cannot be diminished for as long as the balance within oneself is maintained, even if someone tried to impose it on them. The Republic of Plato is a contribution to ethics: a discussion of what justice is, and why is justice necessary to be happy. Furthermore, justice is necessary for harmony between individuals and civic life, Socrates arrives at a conclusion of justice through the use of many extended metaphors. Overall Socrates demonstrates that the just individual is truly perceived as being happier than the unjust individual. The unjust person is not the advantage of the stronger, but the advantage of the smarter. The stronger does things to benefit one self, while the smarter, does things for the benefit of society as a whole. In conclusion Socrates main argument is that justice is a harmonious healthy condition of the soul while the unjust life is led by anger, greediness, and tragedy within the soul. ...read more.