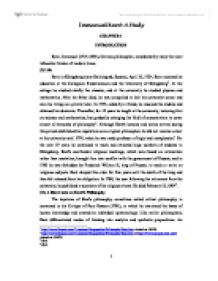 CHAPTER 1 INTRODUCTION Kant, Immanuel (1724-1804), German philosopher, considered by many the most influential thinker of modern times. (I) Life Born in K�nigsberg (now Kaliningrad, Russia), April 22, 1724, Kant received his education at the Collegium Fredericianum and the University of K�nigsberg1. At the college he studied chiefly the classics, and at the university he studied physics and mathematics. After his father died, he was compelled to halt his university career and earn his living as a private tutor. In 1755, aided by a friend, he resumed his studies and obtained his doctorate. Thereafter, for 15 years he taught at the university, lecturing first on science and mathematics, but gradually enlarging his field of concentration to cover almost all branches of philosophy2. Although Kant's lectures and works written during this period established his reputation as an original philosopher, he did not receive a chair at the university until 1770, when he was made professor of logic and metaphysics3. For the next 27 years he continued to teach and attracted large numbers of students to K�nigsberg. Kant's unorthodox religious teachings, which were based on rationalism rather than revelation, brought him into conflict with the government of Prussia, and in 1792 he was forbidden by Frederick William II, king of Prussia, to teach or write on religious subjects. Kant obeyed this order for five years until the death of the king and then felt released from his obligation. In 1798, the year following his retirement from the university, he published a summary of his religious views. He died February 12, 18044. (II) A Short note on Kant's Philosophy The keystone of Kant's philosophy, sometimes called critical philosophy, is contained in his Critique of Pure Reason (1781), in which he examined the bases of human knowledge and created an individual epistemology. Like earlier philosophers, Kant differentiated modes of thinking into analytic and synthetic propositions. An analytic proposition is one in which the predicate is contained in the subject, as in the statement "Black houses are houses." ...read more.

Theoretical reason, Kant says, makes it possible to cognize what is. But reason has its practical employment in determining what ought to be as well. This distinction roughly corresponds to the two philosophical enterprises of metaphysics and ethics. Reason's practical use is manifest in the regulative function of certain concepts that we must think with regard to the world, even though we can have no knowledge of them. Kant believes that, "Human reason is by its nature architectonic."47 That is, reason thinks of all cognitions as belonging to a unified and organized system. Reason is our faculty of making inferences and of identifying the grounds behind every truth. It allows us to move from the particular and contingent to the global and universal. I infer that "Caius is mortal" from the fact that "Caius is a man" and the universal claim, "All men are mortal."48 In this fashion, reason seeks higher and higher levels of generality in order to explain the way things are. In a different kind of example, the biologist's classification of every living thing into a kingdom, phylum, class, order, family, genus, and species, illustrates reason's ambition to subsume the world into an ordered, unified system. The entire empirical world, Kant argues, must be conceived of by reason as causally necessitated (as we saw in the Analogies). We must connect, "one state with a previous state upon which the state follows according to a rule."49 Each cause, and each cause's cause, and each additional ascending cause must itself have a cause. Reason generates this hierarchy that combines to provide the mind with a conception of a whole system of nature. Kant believes that it is part of the function of reason to strive for a complete, determinate understanding of the natural world. But our analysis of theoretical reason has made it clear that we can never have knowledge of the totality of things because we cannot have the requisite sensations of the totality, hence one of the necessary conditions of knowledge is not met. ...read more.