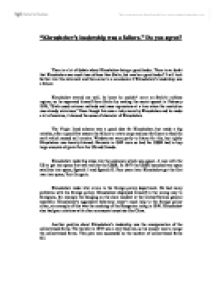 "Khrushchev's leadership was a failure," Do you agree? There is a lot of debate about Khrushchev being a good leader. There is no doubt that Khrushchev was much less ruthless than Stalin, but was he a good leader? I will look further into this statement and then come to a conclusion if Khrushchev's leadership was a failure. Khrushchev started out well; he knew he couldn't carry on Stalin's ruthless regime, so he separated himself from Stalin by making the secret speech in February 1956, "Stalin used extreme methods and mass repressions at a time when the revolution was already victorious." Even though this was a risky move by Khrushchev and he made a lot of enemies, it showed the sense of character of Khrushchev. ...read more.

In 1957 the USSR launched two space satellites into space, Sputnik 1 and Sputnik II. Four years later Khrushchev got the first man into space, Yuri Gorgerin. Khrushchev made vital errors in the foreign policy department. He had many problems with his foreign policy. Khrushchev displayed himself in the wrong way to foreigners, for example the banging on the shoe incident at the United Nations general assembly. Khrushchev's aggressive behaviour wasn't much help to the foreign policy either; an example of this was the crushing of the Hungarian rising in 1956. Khrushchev also had poor relations with other communist countries like China. Another positive about Khrushchev's leadership was the amalgamation of the collectivised farms. The harvest in 1953 was a very bad one, so his answer was to merge the collectivised farms. ...read more.

From the intensity of Stalin's leadership, Khrushchev was a great relief to the Soviet people, especially the writers and artists. But people found their limits, for example the writer Boris Pasternak from the novel Dr Zhivago. Lastly Khrushchev made a big mistake by nearly getting into a nuclear war with the USA. Khrushchev made a deal with Cuba to hide missile launching bases and to get ready to attack the USA in exchange for buying sugar off Cuba. Then followed humiliation, J.F Kennedy forced the Soviet Union to dismantle their missile launching bases in Cuba. In conclusion to this, the text suggests that Khrushchev's good leadership skills are level on par with his bad skills. Examples like banging the shoe on the table at the UN general assembly were humiliating for the Soviet Union. But he done other things like relieve the Soviet Union from the pressure of Stalin was a great thing in itself. ...read more.