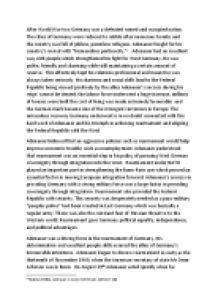 Konrad Adeneur. Adenauer understood that rearmament was an essential step in his policy of pursuing West German sovereignty through integration into the West.

﻿After World War two Germany was a defeated ruined and occupied nation. The cities of Germany were reduced to rubble after numerous bombs and the country was full of jobless, penniless refugees. Adenauer fought for his country?s revival with ?tremendous pertinacity.?[1] . Adenauer had an excellent way with people which strengthened his fight for West Germany. He was polite, friendly and charming while still maintaining a certain amount of reserve. This effectively kept his relations professional and meant he was always taken seriously. His charisma and social skills lead to the Federal Republic being viewed positively by the allies Adenauer?s success during his reign cannot be denied, the labour force underwent a huge increase, millions of houses were built the cost of living was made extremely favourable and the German mark became one of the strongest currencies in Europe. The miraculous recovery Germany underwent is in no doubt connected with the hard work of Adenauer and his triumph in achieving rearmament and aligning the Federal Republic with the West Adenauer believed that an aggressive policies such as rearmament would help improve economic trouble such as unemployment. Adenauer understood that rearmament was an essential step in his policy of pursuing West German sovereignty through integration into the West. Rearmament under NATO played an important part in strengthening the Bonn-Paris axis which proved an essential factor in moving European integration forward. ...read more.

In a 1960 television interview Adenauer said that he believed his most important decision in office was to ally Germany with the free west. Adenauer believed that ?integration actually encouraged European political stability?[6] He felt that the closer European states were with the United States the stronger their domestic position would become. Adenauer?s building of positive relations was of huge benefit to Germany. Alanticisim had numerous advantages for Germany. Adenauer depended on America for troops, aid and protection. Germanys commitment to building alliances with the West and joining the Organisation for European Economic cooperation proved immensely beneficial when the German economy was helped tremendously by the Marshall plan. It was important for ?German economic recovery?[7] and fostered ?a managerial climate of opinion and the depoliticizing of industrial relations, with a focus on enhanced productivity rather than social redistribution , were certainly important factors in post war economic growth.? [8]The success of the Marshall plan further encouraged Adenauer to promote good relations with America and to publically emphasize these relations at any given opportunity. Western integration also protected West Germany from ?Soviet Power and its own internal devils.? [9] If Germany was a neutral state that would place them in an extremely vulnerable position. The United States was a source of security and provider of necessary aid. Adenauer?s predictions that the ?patience and commitment to the West would eventually lead the Soviets to admit defeat?[10] proved correct. ...read more.

Ludwig Erhand introduced the system of ?co-determination,? under which all large enterprises and corporations were legally required to have trade-union representatives included in the decision-making bodies of businesses. Trade Unions lead the working Germans who had a willingness to respond to what the country needed. The Germans who are known to be disciplined, structured and focused fully cooperated with the trades unions. The trade unions autonomous and unified and ?it was potentially one of the most powerful labour organizations in the world, precisely because it was so unified.?[19] By the mid-1950s out of a labour workforce of 35 million, 9.8 million were in labour unions. The labour unions lead to a massive increase in employment and by 1957 the labour force had increased by six million. Adenauer?s conservative, careful attitude was undeniably what Germany needed to lift her out of post war devastation. His success with rearmament and Western Integration are particularly applaudable. However, the political circumstances in his time worked to his advantage. Had he ruled during a different era his methods may not have been nearly as effective? Adenauer has also often been criticised for not paying enough attention to home affairs. The work of his associates, the trade unions and in particular Ludwig Erhard played a major part in the miraculous recovery of Germany during wartime devastation. The work of Adenauer , which focused mainly on foreign affairs was not enough to induce Germany?s miraculous recovery. ...read more.