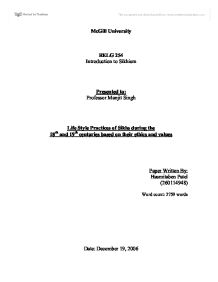 McGill University RELG 254 Introduction to Sikhism Presented to: Professor Manjit Singh Life Style Practices of Sikhs during the 18th and 19th centuries based on their ethics and values Paper Written By: Hasmitaben Patel (260114948) Word count: 2759 words Date: December 19, 2006 According to the history of Punjab, the 18th Century was full of battles, foreign invasions and internal conflict. The Sikhs were put to the test to see if they could act according to the Guru's teachings. This period of history is marked by incomparable sacrifice, courage and the power of endurance. (Course Pack, pg. 393) The great qualities of humble service, forgiveness, spiritual values and regard for women, all according to the Guru's teachings, were demonstrated by the Sikhs. The Sikh chiefs pointed to the Khalsa ideals as a beacon light and attributed their success to the Guru, because they believed that he was the real master and founder of their commonwealth. The Sikhs considered the Khalsa Commonwealth as a sacred creation by the Gurus. All the Sikhs considered themselves equal. The Sikh chiefs declared themselves as humble servants of the Khalsa Panth, working for the welfare and pleasure of the Khalsa Commonwealth. (Course Pack, pg. 407) This time tested the Sikhs to the utmost, and they showed their true character. The 19th Century historical reports mostly describe the reign of Maharaja Ranjit Singh. The lifestyle practices of Sikhs in the 18th and 19th Centuries, along with the Guru's teachings, are critically examined in this paper. Gurmata is described as a resolution in the name of the Guru which took place at annual meetings called Sarbat Khalsa. This was a counsel adopted by the Sikhs in the name of the Guru concerning any religious, social or political issue. This counsel began in the days of Guru Gobind Singh and the practice grew through the troublesome Eighteenth Century to represent the consensus of the community on matters affecting its solidarity and survival. ...read more.

(Course Pack, pg. 403) The rebellious nature of the Sikhs worried Ahmad Shah and so he planned another crusade. In October 1764, he set out with a huge army and attacked Amritsar in December. Many Sikhs retreated into jungle haunts, but a small group of brave Sikhs laid down their lives trying to protect their holy shrine. (Course Pack, pg. 404) This historical account can be related to the virtues of courage and justice. The group of Sikhs who stood up to protect their holy shrine displayed courage and did not let the Afghans through easily. They knew that running away would lead to oppression, which contradicts the principles of justice. On April 10, 1765, the Sikhs returned to claim their territories and reassert their authority in India. A fortnight after the Durranis left, they held a counsel at Amritsar, that is Sarbat Khalsa, in which they planned to capture Lahore. On April 16, 1765, the Sikhs became masters of Punjab. Ahmad Shah was fearfully obsessed with the possibility of the Indian empire falling into the hands of the Sikhs. Hence, he prepared for another (eighth) invasion in 1766. The Sikhs vacated Lahore, killed the Afghan soldiers and forced them to retreat. Ahmad Shah offered the governor's position to Lahna Singh, but he declined. Shah felt helpless when Jassa Singh roamed the neighboring Afghan camp with an army of thirty thousand Sikhs. The likely outcome of a battle appeared to be in favor of the Sikhs, so Shah retreated and let the Sikhs re-occupy their territories. (Course Pack, pg. 404) During the process of Punjab's emancipation, twelve Sikh independencies called Misls were formed. (Course Pack, pg. 405) The Sarbat Khalsa served as their central institution of confederacy. In practice the meetings were democratic, where discussions concerning national problems took place. These Misldar Sikhs were endless fighters who preserved their territory. The teachings of the Sikh Gurus influenced the Sikhs to disregard caste, creed and differences in status, and treat everyone as an equal. ...read more.

Unemployment and begging were absent. Everyone under Ranjit Singh's rule was given the opportunity to climb the ladder of success without any hindrances. The period of his rule proved to be beneficial to everyone. Muslims, Hindus and Sikhs all lived peacefully and worked together efficiently. Everyone was treated equally and lived in a spirit of brotherly love. Ranjit Singh's subjects were proud of him as he was in turn proud of them. (Course Pack, pg. 436, 439) On the contrary, Maharaja violated the code of conduct. He took a number of Muslim and Hindu women as his wives. He was also charged with going out in the city for elephant rides with one of his Muslim wives. He was called before the members of the congregation at Akal Takhat where he acknowledged the charges and admitted to them because he knew that he was guilty. He was prepared to receive lashes on his bare back but was spared because he had honored the views of the authority. This act on the part of Ranjit Singh indicated the virtue of truthfulness. He did not deny his acts in front of the congregation and was ready to suffer the consequences. (Lecture 24 and Course Pack, pg. 429) In conclusion, the Sikhs suffered many atrocities in the 18th Century, while the 19th Century consisted of more peaceful events. Maharaja Ranjit Singh's time was a tolerant one and he treated everyone equally until his rule ended in 1839. (Lecture 24) After his death, British imperialism began to dominate the region. In the face of this oppression, fraternal love amongst Muslims, Hindus and Sikhs brought them together to fight for their country. (Course Pack, Appendix, pg. 470) The Sikh kingdom lasted from 1799 to 1849. In 1857, Queen Victoria assumed direct rule over the whole country. Reference Singh, Manjit. "Sikhs Establish Statehood - 1799 - 1849: Sarkar Khalsa." Lecture 24. Montreal, Quebec. 28 Nov. 2006. Singh, Manjit. RELG-254: Introduction to Sikhism (Course Pack). McGill University, Montreal, 2006, pg. 393-440. ?? ?? ?? ?? 2 ...read more.