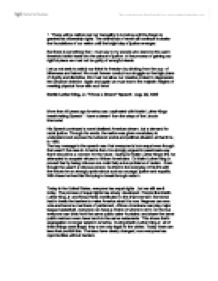 1. 'There will be neither rest nor tranquility in America until the Negro is granted his citizenship rights. The whirlwinds of revolt will continue to shake the foundations of our nation until the bright day of justice emerges. But there is something that I must say to my people who stand on the warm threshold which leads into the palace of justice. In the process of gaining our rightful place we must not be guilty of wrongful deeds. Let us not seek to satisfy our thirst for freedom by drinking from the cup of bitterness and hatred. We must forever conduct our struggle on the high plane of dignity and discipline. We must not allow our creative protest to degenerate into physical violence. ...read more.

During Dr.Matin Luther King's life, he attempted to acquaint virtues to African Americans. Dr.Matin Luther King Jr. proved that by being virtuous one could help solve problems of racism. Even thought he wasn't a virtuous person, he tried to live everyday of his life with the virtues he so strongly spoke about such as courage, justice and equality. With these he lived his life trying to break through racism. Today in the United States, everyone has equal rights, but we still see it today. The process of equal rights has slowly developed. People like Martin Luther King Jr. and Rosa Parks contributed to the improvement. Someone had to break the barriers to make America what it is now. ...read more.

Instead being a good Citizen is someone whom obeys rules and laws but not fanatically, it's someone whom is doing something that is fairly advantaging oneself as well the society they live in. I don't believe that one can be taught how to be a virtuous person, but what I believe in, is that one can be taught some strengths of virtue. I also feel that parent's play a very important role in their child's up bringing. They can teach them to be respectful and about justice and make them aware of what is right and what is wrong. Further more I believe that society has a major role in the child up brining. Today we still see racism, but there are places, which lack some virtues more than others. ...read more.