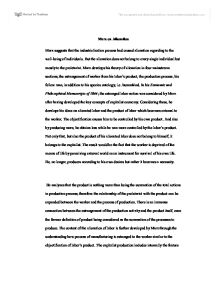 Marx on Alienation Marx suggests that the industrialization process had caused alienation regarding to the well-being of individuals. But the alienation does not belong to every single individual but mostly to the proletariat. Marx develops his theory of alienation in four mainstream sections; the estrangement of worker from his labor's product, the production process, his fellow man, in addition to his species ontology; i.e. humankind. In his Economic and Philosophical Manuscripts of 1844; the estranged labor notion was considered by Marx after having developed the key concepts of capitalist economy. Considering these, he develops his ideas on alienated labor and the product of labor which becomes external to the worker. The objectification causes him to be controlled by his own product. And also by producing more, he obtains less while he was more controlled by the labor's product. Not only that, but also the product of his alienated labor does not belong to himself, it belongs to the capitalist. The result would be the fact that the worker is deprived of the means of life by perceiving external world as an instrument for survival of his own life. ...read more.

As he states in Manifesto of the Communist Party, "All that is solid melts into air all that is holy is profaned, and man is at last compelled to face with sober senses his real conditions of life, and his relations with his kind" (Marx, p. 476). Having considered that worker's labour has been estranged to him; he is also alienated from the natural life, from his activity for survival and to live a better life which carries humanity in a level of a species being. The activity of the life of a species is what forms its disposition. The statement, that the worker's estranged labour is possessed by some other power other than him and also the individual is alienated from the self, which is also can be considered together with the estrangement from the other men. "If his own activity is to him an unfree activity, then he is treating it as activity performed in the service, under the domination, the coercion and the yoke of another man" (Marx, p. 78). The worker has to produce "under the coercion and the yoke of another man" which is serving to the other man's profit and utility. ...read more.

"But labour, the subjective essence of private property as exclusion of property, and capital, objective labour as exclusion of labour, constitute private property as its developed state of contradiction- hence a dynamic relationship moving inexorably to its resolution" (Marx, p.82). Even if, the worker produces a lot, he does not have the capacity to own private property as the capitalist does. The estranged labor has to be owned by someone else; that brings us back to private property. Only if the labor is alienated, it is possible for somebody else to own it. With the same logic, monetary economy becomes possible. If the labor and the product of labor became alienated to the worker and do not belong to him anymore, the payment has to be realized through money. To sum up, Marx analyzes the process of alienation in four parts; from the labour's product, process of production, from himself and his species being. The worker cannot actualize his true abilities and desires; but rather, works just to earn for a living. In the capitalist mode of production, the labor becomes objectified, alienated and renounced. Thus, it results in the emergence of private property and monetary system which later on turns into a reciprocal relation; the labor becomes further alienated. ...read more.