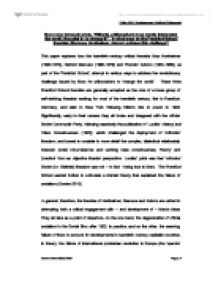 Marx once famously wrote, Hitherto, philosophers have merely interpreted the world; the point is: to change it. In what ways do the Frankfurt School theorists (Marcuse, Horkheimer, Adorno) address this challenge?

Marx once famously wrote, "Hitherto, philosophers have merely interpreted the world; the point is: to change it". In what ways do the Frankfurt School theorists (Marcuse, Horkheimer, Adorno) address this challenge? This paper explores how the twentieth-century critical theorists Max Horkheimer (1895-1973), Herbert Marcuse (1898-1979) and Theodor Adorno (1903-1969), as part of the 'Frankfurt School', attempt in various ways to address the revolutionary challenge issued by Marx for philosophers to 'change the world'. These three Frankfurt School theorists are generally accepted as the core of a loose group of self-defining Marxists working for most of the twentieth century, first in Frankfurt, Germany, and later in New York following Hitler's rise to power in 1933. Significantly, early in their careers they all broke and disagreed with the official Soviet Communist Party, following especially the publication of Luc�ks' History and Class Consciousness (1923), which challenged the deployment of 'orthodox' Marxism, and turned to consider in more detail the complex, dialectical relationship between social circumstances and working class consciousness, 'theory' and 'practice' from an objective Marxist perspective. Luc�ks' point was that 'orthodox' Soviet (i.e. Stalinist) Marxism was not - in fact - being true to Marx. The Frankfurt School wanted further to articulate a Marxist theory that explained the failure of socialism (Gordon 2010). In general, therefore, the theories of Horkheimer, Marcuse and Adorno are united in attempting both a critical engagement with - and development of - Marx's ideas. They all take as a point of departure, on the one hand, the degeneration of official socialism in the Soviet Bloc after 1923, in practice, and on the other, the seeming failure of Marx to account for developments in twentieth-century capitalist countries, in theory: the failure of international proletarian revolution in Europe (the 'spectre' haunting Europe of Marx's Communist Manifesto (1848)); the rise of different forms of fascism, specifically Nazism; and two World Wars (Gordon, 2010). ...read more.

Certainly there seem to be contradictory methodological approaches within the work of the two theorists. A central focus of the Frankfurt School theorists' writings is the function of Reason in society in general, and its relationship with social power in particular. Their non-Marxist influence is Nietzsche, who holds that Reason is a symptom of repression and a tool for social control. Therefore, following the project of exploring the role of culture in 'demolishing the subject' the Frankfurt School explore how modern forms of government - capitalism and communism - can hold sway over the mind. Following the materialist approach of Marx, they argue that Reason is a result of social conditions (Fagan 2005), as opposed to following Hegel, Marx's predecessor, who holds that thought precedes reality (Hampsher-Monk 2008:419-420). However, whereas Marx held that economic conditions ultimately determined social practices, the Frankfurt School theorists believed that culture, history, politics and the family played equally significant roles (Fagan 2005). This is a considerable departure from the basis of Marx's theory of proletarian revolution, aimed at explaining why such revolution failed to occur - namely, culture and the repressive function of Reason make such agency difficult, if not seemingly impossible. Horkheimer therefore defines reason as "the feeling that there is nothing to inquire into, that the concept of reason is self-explanatory, that the question itself is superfluous" (Horkheimer 2004:3). Adorno and Horkheimer hence begin to explore how people rationalize their domination by external forces through the reasoning of 'grand narratives', which the authors dub 'false reasoning' - a point later reiterated influentially by Lyotard (Trey 1998:59). On this view, false reasoning gives rise to the belief that society is run in a way that is "falsely perceived as a reflection of some natural, inevitable order" (Fagan 2005). It naturalises social relations, and therefore must be challenged. Therefore, all thought must be examined and criticized, which gives rise to Critical Theory - or deconstruction, as it is more widely termed today (Atkinson 1999). ...read more.

In conclusion, the short answer to Marx's proclamation of which this essay is the subject is that the Frankfurt School creates a new paradigm in philosophical thinking - Critical Theory. Marx advocates interpreting the world in order to understand the present social conditions and the historical circumstances which cause those social conditions, in order to equip the proletariat with 'class consciousness' required for revolution. In a similar vein, the Frankfurt School theorists agree with Marx's historical materialist view of history and their various works reflect this belief. However, where the Frankfurt School builds upon Marx's ideas is in their assessment of the impact of the culture industry upon man's ability to reason. In doing so, they are inspired by the works of Luc�ks, Nietzsche and Freud in particular. The late Horkheimer is perhaps less of a revolutionary character than Adorno and Marcuse, having lost faith in the capability of the proletariat to rise up in revolution. For Horkheimer, this pessimism stems both from the disappointment in Soviet communism as well as the insertion of middle class aspirations into the minds of the traditional working class. This is further reiterated by Adorno, particularly in his essay The Culture Industry (1984), wherein he purports that the propaganda disseminated by the mass communications system leads society to believe that the way in which it is run, i.e. the status quo, is due to an inevitable and natural order of things. All three theorists take up the challenge to change the public's perception of the world by showing the methodologies which the system employs. Meanwhile Marcuse embroils himself deeply with the revolutionary culture of the 1960s and therefore takes up Marx's challenge with some vigour. Overall, it could be argued that the Frankfurt School hold more firmly to pure Marxist doctrines than do the communists. Yet they expand on his work significantly to take account of developments in political and social life during the twentieth century. From this perspective the Frankfurt School could more accurately be described as social theorists and activists rather than as philosophers. Marx would be very impressed with their efforts. ...read more.