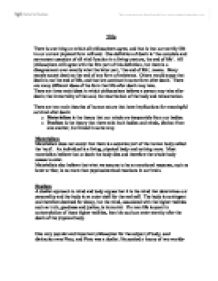 Title There is one thing on which all philosophers agree, and that is that our earthly life in our current physical form will end. One definition of death is 'the complete and permanent cessation of all vital function in a living creature, the end of life'. All philosophers will agree with the first part of this definition, but there is a disagreement over exactly what the latter part, 'the end of life', means. Many people accept death as the end of any form of existence. Others would argue that death is not the end of life, and that we continue in some form after death. There are many different ideas of the form that life after death may take. There are three main ideas in which philosophers believe a person may take after death; the immortality of the soul, the resurrection of the body and reincarnation. There are two main theories of human nature that have implications for meaningful survival after death: o Materialism is the theory that our minds are inseparable from our bodies. o Dualism is the theory that there exist both bodies and minds, distinct from one another, but linked in some way. Materialism Materialism does not accept that there is a separate part of the human body called the 'soul'. ...read more.

with age etc. Also we can think about something without showing it through the behaviour of our bodies. However this may be questioned as we also say "I have a soul". In this case what is 'I' if not the body or the soul alone? Descartes reasoning may be defended as what he is arguing for is fitting with the coherence theory of truth i.e. it is logically possible for us to survive death without a body. However this still does not mean that this is necessarily going to happen for example it would be logically possible for me to survive after a car crash but this does not mean its going to happen. Even if we could survive after death would we still be the same person? Or even a person at all? We owe much of who we are to our bodies as it is through our body that we interact with others. The body is part of what makes me 'me'. A more recent philosopher who has put forward his views on this subject is John Hick. Hick deemed that there are differences between the physical and non-physical characteristics of a person. Hick cultivated a theory in regard to this distinction between body and soul called 'Replica' theory. ...read more.

Dawkins felt that there is no such thing as soul one, a soul which is separate from the body. He did feel that soul has a meaning although it is not one which entails the soul being a distinct thing. He felt that soul was "intellectual or spiritual power. High development of the mental faculties." In could be in terms of things such as 'soul music'. In 'River out of Eden' Dawkins describes a river of DNA that branches through geological time. Dawkins therefore did not believe that we have a soul or that the soul was in any way an entity in its own right but instead that it could only be used as a descriptive word until science finds an answer for what it is. Dawkins theory of evolution opposes the idea of a soul, as there is no time where it could have entered. Everything in the world would have one which, some would say, challenges the meaning of what a soul is. This may be a more believable theory as empirical proof and science can back it up. However it does not provide us with evidence as to whether or not there is a soul separate from the body and may be disregarded by people who are eminently religious. ...read more.