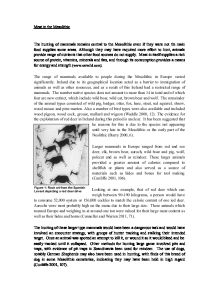 Mesolithic food. The hunting of mammals remains central to the Mesolithic even if they were not the main food supplies some areas. Although they may have required more effort to hunt, animals provide range of nutrients that other food sources do not supp

Meat in the Mesolithic The hunting of mammals remains central to the Mesolithic even if they were not the main food supplies some areas. Although they may have required more effort to hunt, animals provide range of nutrients that other food sources do not supply. Meat in itself supplies a rich source of protein, vitamins, minerals and fats, and through its consumption provides a means for energy and strength (www.eatwild.com). The range of mammals available to people during the Mesolithic in Europe varied significantly. Ireland due to its geographical location acted as a barrier to immigration of animals as well as other resources, and as a result of this Ireland had a restricted range of mammals. The number native species does not amount to more than 14 in total and of which four are now extinct, which include wild boar, wild cat, brown bear and wolf. The remainder of the animal types consisted of wild pig, badger, otter, fox, hare, stoat, red squirrel, shrew, wood mouse and pine marten. Also a number of bird types were also available and included wood pigeon, wood c**k, grouse, mallard and wigeon (Waddle 2000, 12). ...read more.

An example of the way in which an animal may have been procured comes from along the River Tjonger in the Netherlands. Researchers from the University of Gronningen suggest from the evidence, that an auroch after been trapped in a pit was killed by the use of a club round the head and arrows from a bow. The animal was then processed by the hunter, who consumed part of the kill on site; this action may have been performed as reward for the killing of the animal. Using a flint knife the hunter then precisely removed all the meat from the bones as well as the hide to transport back to camp (www.physorg.com). A range of smaller mammals were also available in addition to the larger animals. These included beaver, hare, fox, pine marten, hedgehog and badger along with small rodents. These smaller examples would have been acquired by the use of snares rather than hunting and provided furs as well as a supply of meat (Conneller and Warren 2011, 72). ...read more.

Possible cooking methods included the use of stones and hearths. The fact that stones and hearths retain heat and make a good cooking platform may be the reason they are found on many sites. The variety of ways in which these can be used includes, heating up the stones and directly cooking meat on the surface or placing stones that have been heated in a fire directly into water or other liquids, creating a boiling effect. One application of the use of hearths may have been to cover them with vegetation and create a steaming process for the cooking of meat or simply placing it on a rack for cooking within the hearth. Other methods may simply have consisted of roasting an animal over an open fire (Conneller and Warren 2011, 77-78). Animals as well as been a food source may have also served a role in ritual and social events. Feasting may have been practiced as means of social relations and hierarchy or just to consume large amounts of meat quickly. The placing of animal remains as grave goods and their use as possible ritual elements may represent the relationship Mesolithic people had with animals and the value they placed upon them (www.britannica.com). ...read more.