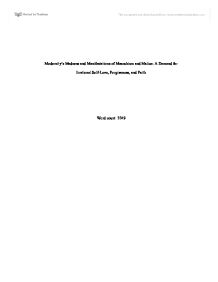 Modernity's Madness and Manifestations of Masochism and Malice: A Demand for Irrational Self-Love, Forgiveness, and Faith.

Modernity's Madness and Manifestations of Masochism and Malice: A Demand for Irrational Self-Love, Forgiveness, and Faith Word count 3349 Fyodor Dostoevsky's birth-year representatively embeds him in two events that determine Russia's course for the next hundred years; Alexander Pushkin, at sixteen years old, became Russia's first national poet in 1815 and in 1825 the Decembrists' failed coup d'etat of Nicholas I, the country's one shot at democracy and exoneration from serfdom, initiated a 'Frozen Society', marked by harsh censors and absence of reform. Nikolai Gogol appropriately arrived in St. Petersburg from rural Russia in 1837 when Pushkin died following a duel in timely fashion to claim Pushkin's title. The trinity of Russian Romantic writers not only share styles which coalesce to form the great tradition now known as Russian Literature, but would also uniquely define themselves as representatives of their people. That creating and finding identity in St. Petersburg, both Russian capital and 'Window to the West', was perplexing and difficult for its people is demonstrated by a cursory analysis of the aforementioned writers' related, while idiosyncratic, tendencies and meaningful characters. Joseph Frank, in his five volume oeuvre, explicates the natural influence of Pushkin and Gogol on Dostoevsky. Russian literature from the 1830s was strongly influenced by Germanic Romanticism and the school's "dissonance between the ideal and real", and this is obsequious in Pushkin's The Bronze Horseman and The Queen of Spades and Gogol's Nevsky Prospect, The Overcoat, and The Diary of A Madman. The main characters in three of these five end their lives and the story in suicide, and all five are clearly insanely mad as the conclusion nears as a result of the shattering of their projected ideals on reality. A contemporary, N.A. Polevoy, described his artistic aim, "to show that the mad dreams of the poets do not fit in with the world of material existence"; the 'dreamer' "becomes a symbol of the failure to grapple with and master the demands and challenges of life". ...read more.

Dostoevsky's exposure of idealist radicals' 'advanced ideas' and their implications are read as "a declaration of Dosteovsky's supposed adherence to Nietzsche's philosophy of 'amoralism' and the will to power" or "the revolt of the human personality against all attempts to limit its inexhaustible potentialities3" (Frank, 219) - but Nietzsche was only twenty years old when NfU was published, and his ideas had surely not been successfully communicated by then; most of Nietzsche's works were first published shortly before his death in 1900. Nietzsche actually proclaimed that "Dostoevsky was the only psychologist from whom I had anything to learn"4. The Underground Man: Sick and Spiteful Immediately following the aforementioned beginning of NfU, the narrator speaks of his "liver's being diseased" and his refusing to see a doctor. He continues by admitting that he really doesn't know a thing about his illness and later he describes his 'hyperconsciousness' is a disease "but so is being conscious at all. I insist on it. But let's leave that alone for a minute (1,6)"5. His "'reason,' which would prompt him to seek a doctor out of self-interest is evidently thwarted by some other motive" (Frank, 220). He continues his address about his spite, describing that it was "begging to be let out, but I would not let them, would not let them, purposely let them"6 (4). Frank remarks that this man is not evil and perverse 'by nature', but he is a "character innately deformed and distorted" (221), and that he "enjoys the experience of his own degradation", admitting "to being an unashamed m*******t [my emphasis]" (222). He continues by proclaiming this as inevitable and begins his 'rant' on 'laws of nature' and the "inertia7 which results directly from these laws" which, consequently, one couldn't change (7). "Spite is not a valid cause for any kind of action, and hence it is the only one left when the laws of nature make any justified [my emphasis] response impossible" (223). ...read more.

Who was the most tragic figure, the Underground Man or the Grand Inquisitor? The underground man battles with egoism and altruism (Frank, 221). Ivan battles with reason and faith, to which Alyosha responds, "Your poem is in praise of Jesus, not in blame of him - as you meant it to be." But the younger, na�ve, and innocent does not see precisely the despair, or the One Question15 that incites Ivan's declaration that he will end his life at thirty years of age. Alyosha its affecting Ivan after their lunchtime rendezvous has concluded, "How will you live?... with such a h**l in your heart and your head, how can you?" An Irrational Conclusion Madness results from development of the rational self, which necessitates evil to demonstrate it's autonomy over the 'best rational decision'. But there is the other side to the paradox too, that Man has an awareness of the self while also recognizing, to some relative degrees, Man's place in the world with which we live. The problem lies in that this world of which we are a part may only be a totalitarian ideal, and the malefits of a separation of ideals from reality has been shown in the above. How is one to respond? to others? and the World? Dostoevsky, I believe would say faith and forgiveness - revenge is only a perpetuation of evil, and a manifestation of individual freedom therefore; one only desires revenge from when the 'self' is offended. But selfless love has no offense, no aggression. The rational necessarily involves a self, for whom the advantage is calculated. Dostoevsky explicates the dangers of a 'hyperconscious self' via the Underground Man, and the Grand Inquisitor, a product of his last work. So years of masterpieces, thousands of pages, and years in labor camps after a truly revelationary experience have afforded a truly irrational conclusion - please forgive him. ...read more.