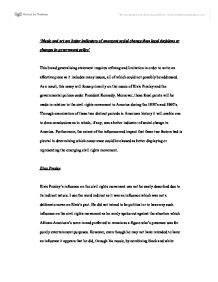 'Music and art are better indicators of emergent social change than legal decisions or changes in government policy' This broad generalising statement requires refining and limitation in order to write an affective piece as it includes many issues, all of which could not possibly be addressed. As a result, this essay will focus primarily on the music of Elvis Presley and the governmental polices under President Kennedy. Moreover, these focal points will be made in relation to the civil rights movement in America during the 1950's and 1960's. Through examination of these two distinct periods in American history it will enable one to draw conclusions as to which, if any, was a better indicator of social change in America. Furthermore, the extent of the influence and impact that these two factors had is pivotal in determining which occurrence could be classed as better displaying or representing the emerging civil rights movement. Elvis Presley Elvis Presley's influence on the civil rights movement can not be easily described due to its indirect nature. I use the word indirect as it was an influence which was not a deliberate move on Elvis's part. ...read more.

`He was restricted by opposition from the general public in America toward advancement in black civil rights and by a fear of loosing southern voters. Irrespective of this, Kennedy still made inroads in the civil rights movement which was significant in its advancement. Many historians have argued that President Kennedy's approach to the civil rights movement was, as in the words of Nick Bryant, (author of The Bystander: John F. Kennedy and the Struggle for Black Equality) 'to cautious and timid5'. This opinion has been supported by many civil rights scholars, such as Martin Luther King, Jr, who told an aide in 1962 that the Kennedy administration had a 'schizophrenic tendency6' when the situation called for an aggressive direct approach for civil rights legislation. It appears that this response by Kennedy may have been out of fear of loosing support in the southern electorate. He had stated that that these powerful southerners 'should be charmed and, on occasion, gently cajoled, but never confronted directly7'. It was not only a fear of loosing support which brought a cautious approach by Kennedy, as he also appeared to have a clear sense of the position that African-Americans were viewed upon within America which influenced his political decisions. ...read more.