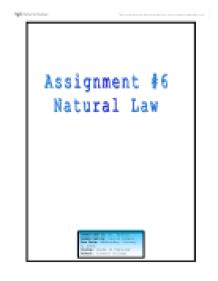 Natural Law The term "natural law" is ambiguous. It refers to a type of moral theory, as well as to a type of legal theory, despite the fact that the core claims of the two kinds of theory are logically self-determining. According to natural law ethical theory, the moral standards that govern human behavior are, in some sense, objectively comes from the nature of human beings. "According to natural law legal theory, the authority of at least some legal standards necessarily derives, at least in part, from considerations having to do with the moral merit of those standards."1 There are a number of different kinds of natural law theories of law, differing from each other with respect to the role that morality plays in determining the authority of legal norms. "Belief that the principles of human conduct can be derived from a proper understanding of human nature in the context of the universe as a rational whole. Although voluntarists suppose that God could will anything at all, Aquinas held that even the divine will is conditioned by reason. Thus, the natural law provides a non-revelatory basis for all human social conduct. Modern appeals to natural law are the foundation for social thought in Grotius and Pufendorf."2 As stated earlier, there are many different understandings of "natural law" and the Church's understanding of natural law is based upon with human intellect and the power of reason, distinguishing them from any other creation on earth. In this term, the term "natural law" is understood as the laws of nature, meaning the order which governs the materialistic universe. According to St.Thomas, the natural law is "nothing else than the rational creature's participation in the eternal law." 3 (I-II, Q.xciv). Eternal law is God's wisdom and the direction and movement of all being. When God created creatures and humans He ordained them and directed each and every one to come an end. ...read more.

"The natural law is written and engraved in the soul of each and every man, because it is human reason, ordaining him to sin...But this command of human reason would not have the force of law if it had the voice and interpreter of a higher reason to which our spirit and our freedom must be submitted."10 In terms of sodomy (unnatural s****l intercourse), this is one particular issue that the Church condemns because sodomy is against nature. As Catholics we all have to work together to build up the kingdom of God through His grace He has given us. We all have to be a witness to Christ, doing acts of goodness through love and having compassion for everyone. With "exceptions", as Christians we all believe God's grace resonates in and through us. His grace is so thorough that we act and believe in this. The argument between morality and society is that, it is also unethical for religious beliefs to take away h********l rights in the way they want to live their life. Catholics do believe that you can live your life in certain ways that you want. Remember that humans aren't programmed by God. Humans have freewill, granted by God, and many people misjudge that nowadays. Freewill is what He granted us, but at the same time we use that freewill through God's grace. God's grace is operative and leads to people's goodness and morality. Catholics call people to conversion as suppose to condemnation. Let us be clear that "gay" is a neologism, a euphemism of recent origin, and refers to sodomy or, to be precise, a**l s****l intercourse. There is nothing gay about it, in the proper meaning of the word. From ancient-and biblical-times, this practice has been regarded by the greatest legislators and moralists as a vicious s****l perversion. It is condemned equally by the Old and the New Testaments and by Plato in his Laws. ...read more.