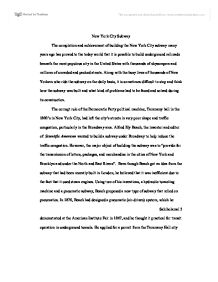 New York City Subway The completion and achievement of building the New York City subway many years ago has proved to the today world that it is possible to build underground railroads beneath the most populous city in the United States with thousands of skyscrapers and millions of crowded and packed streets. Along with the busy lives of thousands of New Yorkers who ride the subway on the daily basis, it is sometimes difficult to stop and think how the subway was built and what kind of problems had to be faced and solved during its construction. The corrupt rule of the Democratic Party political machine, Tammany hall in the 1800's in New York City, had left the city's streets in very poor shape and traffic congestion, particularly in the Broadway area. Alfred Ely Beach, the inventor and editor of Scientific American wanted to build a subway under Broadway to help reduce the traffic congestion. However, the major object of building the subway was to "provide for the transmission of letters, packages, and merchandise in the cities of New York and Brooklyn and under the North and East Rivers". Even though Beach got an idea from the subway that had been recently built in London, he believed that it was inefficient due to the fact that it used steam engines. ...read more.

In front of the waterproofing shield behind the steel columns, there was system of thick ducts with electric cables. The methods of construction varied depending on the time of the construction and the personal views of the constructors at different times. During the construction, however, they often had to face various difficulties such as the networks, the location of gas and water mains, pneumatic tubes, steam pipes, and electric equipments. The contract for building of the road consisted the following statement: "The railway and its equipment as contemplated by the contract constitute a great public work. All parts of the structure where exposed to public sight shall therefore be designed, constructed, and maintained with a view to the beauty of their appearance, as well as their efficiency." According to this statement, one typical standard track was usually constructed using broken stone ballots and hard pine timber crossties. All curves were made out of steel inside the guardrails. The switches were built using the best quality of its time. However, it might be argued today that the New York City Subway has not experienced the provisions mentioned in this contract. The city officials have not put any effort or time to fix the problems occurring in the railroads such as the "appearance" and possibly "efficiency. Due to the fact that the underground railroads needed so much power in order to operate fast and right, the city decided to build the powerhouse building adjacent to the North River, which was located in the center. ...read more.

5) The IRT, BMT, IND: After the city legislature agreed with the idea of constructing tunnels in various locations, it decided to create three major competing transit agencies. 6) Types of constriction: Five types 7) Statement contract: "The railway and its equipment as contemplated by the contract constitute a great public work. All parts of the structure where exposed to public sight shall Sahiholamal 3 therefore be designed, constructed, and maintained with a view to the beauty of their appearance, as well as their efficiency." 8) Powerhouse: The building was placed on the block bordered by West 58th and 59th Street, Eleventh Avenue, and Twelfth Avenue. 9) Oil system: The filtered oil was supplied under pressure from superior storage tanks and was then pumped to the other minor journals. 10) Platforms: At almost all local stations, there were platforms located outside of the tracks. These platforms served as waiting areas for passengers while the train was on its way. 11) Lighting: The station platforms were all lighted by incandescent lamps supplied from the 120 volts wiring paths. 12) Emergency break: At every railroad car, there were placed a glass-covered box with an emergency hook provided inside. 13) Ticket booths and payment methods 14) The New York City Subway today: Today, the New York City subway plays a big role on the lives of millions of people who ride the subway daily as a useful means of transportation. Sepideh Sahiholamal Sahiholamal 1 Mr. ...read more.