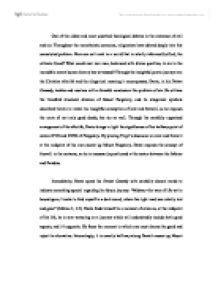 One of the oldest and most unsettled theological debates is the existence of evil and sin. Throughout the monotheistic centuries, religionists have delved deeply into this convoluted problem. How can evil exist in a world that is wholly informed by God, the ultimate Good? What could ever lure man, bestowed with divine qualities, to sin to the incredible extent human history has witnessed? Through the insightful poetic journey into the Christian afterlife and the allegorical meaning it encompasses, Dante, in his Divine Comedy, tackles and resolves with a forceful conclusion this problem of sin. He utilizes the threefold structural division of Mount Purgatory, and its allegorical symbols described therein to reveal his insightful conception of love and freewill, as he exposes the roots of not only good deeds, but sin as well. Through his carefully organized arrangement of the afterlife, Dante brings to light the significance of the halfway point of cantos XVII and XVIII of Purgatory. By placing Virgil's discourse on love and freewill at the midpoint of his own ascent up Mount Purgatory, Dante exposes the concept of freewill in the universe, as he is necessarily positioned at the centre between the Inferno and Paradise. Immediately, Dante opens his Divine Comedy with carefully chosen words to indicate something special regarding his future journey. ...read more.

At this cornice, the sin of pride is purged by a forced submission to the opposite virtue. This method adopts the Aristotelian notion of habituating virtue and forms the pattern of purgation Dante follows throughout Purgatory, as penitence is forced by either suffering the effects of the sin, practicing its opposing virtue, or both. In order to further examine the implications of Middle Purgatory, as it represents the centre and crux of Dante's assertions on love and freewill, it is necessary to first consider Upper Purgatory. In this third category, the sins of Covetousness, Gluttony and l**t are shown as consequences of excessive love. Dante's dream of the Siren before ascending these cornices indicates the character of these sins. In the dream, Dante perceives the "ancient witch" (Purgatory XIX, 58) as beautiful, though she is far from it according to common sight. His perverted gaze is like that of the covetous, gluttonous, and lustful who desire mundane things simply because of their distorted imagination in which narcissism is prevalent. The covetous, for example, sought to acquire great wealth in life because of the attached power that could satisfy the burning impulses of their egoism. On the Fifth Cornice, they are seen "weeping, their faces turned towards the ground" (Purgatory XIX, 72), focused upon the earth in which they invested too much in life. ...read more.

Rational love in the mind should see the good and desire it, but if it fails to pursue it with all the power of its freewill then inadequate love is purged on this fourth and middle terrace, that of the Sloth. Dante's approach to this medieval notion of love and freewill, sprung from his intellectual inheritance from Plato and Aristotle. He weaves together vivid poetic symbols, heavily charged allegorical hints and structural implications to advance a scholarly argument about the nature of good and evil. In this way, the full weight of his idea that love is actually the seed of all sin is most convincingly conveyed. Dante necessarily gives his discourse on love and freewill at the very center of his Divine Comedy to illustrate the importance of the midway point of his own spiritual ascent. Dante focuses on the importance of this pivotal moment early on, when he presents the "midway" as the first word in the work, clearly illustrating its significance. Dante's elaborate sketch of the climb from the depths of the Inferno to the Earthly Paradise is really an inner spiritual journey devoted to exposing his own sins and discovering the underlying layer of pure love that is found within his own heart. When Dante does finally pass through the fire and enters the Earthly Paradise he recognizes it as a return to the starting point of the Christian quest, and not his final destination, as it is only then that he understands love's true purpose. ...read more.