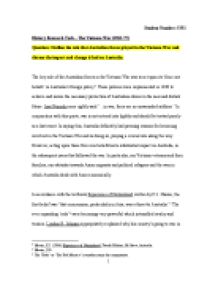 Outline the role that Australian forces played in the Vietnam War and discuss the impact and change it had on Australia.

ï»¿Student Number: 5351 History Research Task – The Vietnam War (1962-75) Question: Outline the role that Australian forces played in the Vietnam War and discuss the impact and change it had on Australia. The key role of the Australian forces in the Vietnam War was to act upon its ‘four core beliefs’ in Australia’s foreign policy[1]. These policies were implemented in 1949 to achieve and insure the necessary protection of Australian shores in the near and distant future. José Narosky once rightly said ‘…in war, there are no unwounded soldiers.’ In conjunction with this quote, war is not entered into lightly and should be treated purely as a last resort. In saying this, Australia definitely had pressing reasons for becoming involved in the Vietnam War and in doing so, playing a crucial role along the way. However, acting upon these four core beliefs had a substantial impact on Australia, in the subsequent years that followed the war. In particular, our Vietnam veterans and their families, our attitudes towards Asian migrants and political refugees and the way in which Australia deals with Asia economically. In accordance with the textbook Experience of Nationhood written by K.J. Mason, the first belief was ‘that communism, particularly in Asia, was a threat to Australia.’[2] The ever expanding ‘reds’[3] were becoming very powerful which intensified rivalry and tension. ...read more.

The impact that the war had upon the Vietnam veterans was detrimental to both their physical and psychological health. The Vietnam War was very topical and controversial at the time and was the catalyst of extreme ridicule and harassment towards Vietnam veterans in the earlier years of their ?welcome home?[10]. Vietnam veteran Gary McMahon describes his experience on how they were treated on their arrival. ?Returning veterans were ignored. Some of us were spat at, called murderer or baby killer?? The widespread disapproval in Australian society to the war and to conscription in particular meant that the returned soldiers were not treated with the dignity and appreciation that they deserved on returning home. Many had seen and experienced the most terrible sights in combat, and needed all the support and thanks that they could to overcome the negative effects. It is, however, too late for many of the veterans who have been plagued by physical and mental problems, resulting in family and friends to be put under excruciating pressure. Paul Ham?s book Vietnam ? the Australian War states ?the collision of war and peace had a terrible social cost?, often marriages broke down, ?families and friends torn apart? and often feeling like they are ?strangers in their own home?[11]. It?s worth mentioning that Mason?s interpretation thoroughly supports this concept. ...read more.