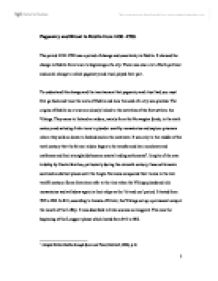 Pageantry and Ritual in Dublin from 1450 -1700. The period 1450-1700 was a period of change and uncertainty in Dublin. It showed the change in Dublin from town to beginnings of a city. There was also a lot of both political and social change to which pageantry and ritual played their part. To understand this change and the involvement that pageantry and ritual had you must first go back and trace the roots of Dublin and how the seed of a city was planted. The origins of Dublin as a town are closely linked to the activities of the first settlers: the Vikings. They came to Ireland as raiders, mainly from the Norwegian fjords, in the ninth century and sailed up Irish rivers to plunder wealthy monasteries and capture prisoners whom they sold as slaves to Iceland and on the continent. It was only in the middle of the tenth century that the former raiders began to be transformed into merchants and craftsmen and their strongholds became coastal trading settlements1. In spite of the over lordship by Gaelic families, particularly during the eleventh century, these settlements survived as distinct places until the Anglo-Normans conquered their towns in the late twelfth century. ...read more.

They were dedicated to saints and they also had a chapel4. They were both located near or in a parish church. They had their own feast days and were even sometimes side by side in the one church sharing the same altar. This shows how the economy could have been side by side with religion. The main similarity that existed between the guilds and fraternities was the fact that they were both dedicated to saints and each had their own specific feast days to celebrate. The most important ones were the Corpus Christi procession and the pageant of St.George. Both of these contributed to the pageantry and ritual of this time but more importantly they contributed to civic identity. The Corpus Christi procession gave ample opportunity for the display of liveries, banners, insignia and emblems of the various guilds. It was still however, a religious act, a solemn and public profession of Catholic faith in the real presence of Christ in the Holy Eucharist. The patronal feasts of the guilds were days of great rejoicing and display. Gorgeous processions in picturesque and costly robes with lights and flowers and music, moved in perfect order, gaily through the streets and delighted the hearts of young and old. ...read more.

The gradual replacement of religious ceremonies and rituals were not only victims of the reformation. The dissolution of the religious orders also had another casualty; the relationship between civic families and particular houses7. These relationships had been built up in previous centuries in the matter of testamentary gifts of land and personal wealth, preference as places of burial and repository hopes for spiritual succour such as orbits. Within the trade and merchant guilds the replacement of religious ceremonies and rituals associated with traditional religious festivals meant differing reactions and opinions occurred in the first decade or so after the 1560 settlement. The Corpus Christi procession which usually involved all members of guilds was cancelled altogether. Some fraternities used this change in attitude to religious ceremonies as a chance to abandon other customs too. But the city council ensured that some customs continued on. The reason given was due to the attachment to civic pieties but the real reason was the need for civic order to be maintained rather than anything else. Throughout the period 1450-1700, pageantry and ritual can be seen throughout Dublin. It was much stronger in 1450 than in 1700 but this was mainly due to the trade guilds and fraternities. If it were not for the Reformation and the dissolution of monasteries\that came with it maybe the Corpus Christi procession and indeed others like it would still be as important today as it was then. ...read more.