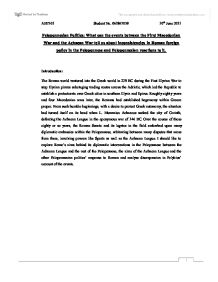 Peloponnesian Politics: What can the events between the First Macedonian War and the Achaean War tell us about inconsistencies in Roman foreign policy in the Peloponnese and Peloponnesian reactions to it.

Peloponnesian Politics: What can the events between the First Macedonian War and the Achaean War tell us about inconsistencies in Roman foreign policy in the Peloponnese and Peloponnesian reactions to it. Introduction: The Roman world ventured into the Greek world in 229 BC during the First Illyrian War to stop Illyrian pirates sabotaging trading routes across the Adriatic, which led the Republic to establish a protectorate over Greek cities in southern Illyria and Epirus. Roughly eighty years and four Macedonian wars later, the Romans had established hegemony within Greece proper. From such humble beginnings, with a desire to protect Greek autonomy, the situation had turned itself on its head when L. Mummius Achaecus sacked the city of Corinth, defeating the Achaean League in the eponymous war of 146 BC. Over the course of those eighty or so years, the Roman Senate and its legates in the field embarked upon many diplomatic embassies within the Peloponnese, arbitrating between many disputes that arose from there, involving powers like Sparta as well as the Achaean League. I should like to explore Rome's aims behind its diplomatic interventions in the Peloponnese between the Achaean League and the rest of the Peloponnese, the aims of the Achaean League and the other Peloponnesian polities' response to Roman and analyse discrepancies in Polybius' account of the events. Rome's aims in the Peloponnese for the Achaean League: Contact between the Achaean League and the Roman Republic was first established after the demise of the Illyrian War in 228 BC. Roman envoys were sent to the Aetolian and Achaean Leagues respectively to announce this victory with another envoy sent to Athens after the swearing of the peace treaty (Polybius 2.12.4-8; Eckstein 2008: 41). However, these initial contacts were not followed up; no permanent treaties were signed (Eckstein 2008: 74). Presumably, the purpose of these envoys was to seek approval and recognition of their endeavours against the piratical Illyrians. ...read more.

Moreover, perhaps the disparity in treatment is explained by the fact that Rome simply thought that Nabis threatened stability in the Peloponnese (Eckstein 1987: 305). However, the peace settlement remarked that Sparta should remain independent (Eckstein 2006: 303). Antiochus II, the Seleucid king began the Roman-Syrian War of 192-188 BC by marching his army through Greece and forcing states to join his side. We are told that some states in the Peloponnese, like Elis switched sides to support Antiochus (Eckstein 2008: 325-6). Though helping Rome in the war, the Achaean League used the situation to conquer Sparta, Elis and Messene - despite Flamininus raising objections to this. Nothing was done to prevent the League from doing so bar ineffectual reasoning (Livy 36.31.4-6; Eckstein 2008: 332). Flamininus even supported the inclusion of Messene in the Achaean League (Errington 2008: 240). It would appear that Rome was tolerating their actions, despite having proclaimed 'freedom' for Greece in 196 (Polyb. 18.47.6-7), and thus was sending out the wrong message (Eckstein 2006: 302-3). In 191 BC, a Spartan delegation arrived in Rome asking for the return of hostages taken by Rome after Nabis' defeat in 195, as well as the restoration of perioikic towns to Sparta (Polyb. 21.1.1-2). This request was initially brushed off by the senate (Polyb. 21.1.1-4), who told them to seek satisfaction with the Achaean council, which clearly shows a Roman deference to the League in local politics at the time. However, acknowledging the appeal on behalf of the Spartans was effectively went against the League's constitution. It was supposed to be the League's remit to deal with its own constituents and the effect of this promoted fragility in the Peloponnese. Over the course of time, the continual pleading to Rome just made its hand more powerful (Derow 2003: 66). The senate did send back the hostages in 190, though keeping Nabis' son behind (Polyb. ...read more.

Callicrates, on his own, convinced the Achaean assembly to moderate their stance towards Sparta. He did not argue for them to both leave the League and he only had a letter from the senate backing his recommendation (Eckstein 2008: 369). Polybius was anti-Callicrates mostly due to the fact that he blames his deporting to Rome on Callicrates; he was his political opponent in the Achaean assembly for several years (Errington 2008: 240). He was not the most impartial observer when it came to Roman involvement in the region, thinking that they had acted nefariously after the Third Macedonian War. Polybius' position in Achaean and then Roman society later made him a 'well-placed observer' (Rich 1985: 95). Rome did try to intervene in Peloponnesian politics but most of the time, whatever the senate or legates tried to do, they were ignored; so even if they could act underhand in local politics, they were not listened to anyway (Rich 1985: 95)! Conclusion: As we have seen, Rome did try to maintain a stable relationship with the Achaean League. For the most part, Rome certainly did favour the Achaean League for quite some time due to its support in various wars. Though they were concerned with its expansionist policy before the Third Macedonian War, it was only until after the war that the Republic started to realise that if the League was not reigned in soon, it would start to dominate not just the Peloponnese, but then Greece itself! It was not just impatience with the League, but a dawning realisation that no matter what they did, the Achaean League would continue to follow its own interests. Other poleis in the Peloponnese suffered because of Rome's disposition towards the League and this only actually changed after the final defeat of the League at Corinth. For the League itself, an alliance with Rome was just a way to guarantee survival in an area where many kingdoms and states had vested interests. Rome's decision to go to war with them in 146 BC came totally out of the blue. ...read more.