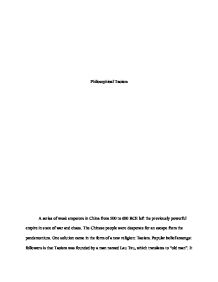 Philosophical Taoism A series of weak emperors in China from 500 to 600 BCE left the previously powerful empire in state of war and chaos. The Chinese people were desperate for an escape from the pandemonium. One solution came in the form of a new religion: Taoism. Popular belief amongst followers is that Taoism was founded by a man named Lau Tzu, which translates to "old man". It is said that he lived during the time of Confucianism, which was another religion that sprout up in response to the conditions in China at the time. Lau Tzu was actually a librarian who lived a simple life in accordance with nature. He was discouraged by the non naturalistic attitudes of the people around him and therefore decided to ride away on a water buffalo toward Tibet. According to the story, he was stopped at one point by a man who tried to persuade him to stay. When Lau Tzu refused he asked him to at least leave the people with a record of his ideas. He agreed to this request and the Tao Te Ching was produced (Smith). The lifestyle and attitude that has evolved from the philosophy of this text are extraordinarily interesting and admirable. Tao Te Ching translates into English as "The Way and It's Power". ...read more.

This idea is also the basis for their creation theory. They believe that the earth was originally just a ball of mass and began to form only when yin and yang emerged and began to create the world as we know it today (Zhao). Finally, another important belief already alluded to is that of naturalism. In this philosophy it is believed that nature should not be exploited or destroyed but instead "befriended" (Smith). The concept of Tao states that people are at their very highest when they can harmonize with nature and the ways of the earth. By living with and amongst the earth instead of on it an important balance is achieved. When it comes to the issue of how to become the ideal Taoist there is a focus on the concept of Wu Wei. The goal of a philosophical Taoist is to preserve Tao by using it up in the most efficient way. Wu Wei is ideal because it is "pure effectiveness". It is spontaneous action in accordance to the course of nature. In order to achieve this it is important not to waste any energy on things like bickering or conflict because ultimately the course of the universe cannot be changed anyway. It is important to simply flow with nature by escaping from the conscious mind and returning to the true, subliminal mind. ...read more.

However, although it may appear effortless and easy to achieve wu wei and to lead a completely balanced life it is in fact extremely challenging, which makes it all the more admirable. I personally believe that this lifestyle is extraordinary. To live with such ease and calmness must be extremely invigorating and clear. However, I do not think that it would be entirely possible to achieve this lifestyle living in most places in the United States. Since so much emphasis is placed on the appreciation and nurturing of nature it seems unlikely that there are many places in this county that would be conducive to this lifestyle. Also, being able to overcome the influences and pressures that we are faced with each day would be an astonishing feat. I feel that the only way to do that would be to completely remove yourself from society. However, each of my sources mentioned at least once that it was important to not do that. The truly admirable quality, in my eyes, of those who choose to follow this lifestyle is their strength and ability to maintain this philosophy and attitude regardless of their surroundings. Of course, some surroundings are more favorable than others and that is why Taoism is mainly only in China, a place where nature is all around and appreciated much more than it is here. ...read more.