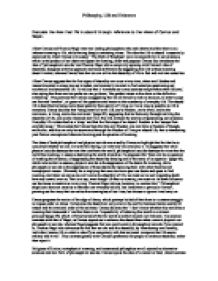 Philosophy Essay. Evaluate the view that life is absurd through reference to the views of Camus and Nagel.

Evaluate the view that life is absurd through reference to the views of Camus and Nagel.

Albert Camus and Thomas Nagel were two leading philosophers who each determined that there is no inherent meaning to life, whilst having deeply contrasting views.  The idea that life is absurd  is essentially explained by Albert Camus in his essay ‘ The Myth of Sisiphyus’ as an incompatibility in our existence, which is the product of our desire and quest for meaning, order and purpose. Camus also introduces the idea of ‘philosophical suicide’ and Thomas Nagel while complicity agreeing with Camus’s idea of absurdity, disagrees with his approach and reacts differently by suggesting that life without meaning doesn’t matter; whereas Camus feels that we can utilize the absurdity of life to fuel and motivate ourselves.

Albert Camus suggests that the first signs of absurdity can occur at any time, when small doubts and insecurities start to creep into our mindset, and eventually we start to find ourselves questioning our mechanical and structured life. He tells us that it ‘awakens our consciousness and provokes what follows’, also saying that there are two paths we can go down; ‘the gradual return to the chain or the definitive awakening’. This portrays that Camus is suggesting that we are forced to make a decision, to either accept our fate and ‘awaken’, or ignore all the questions and return to the mundanity of everyday life. The absurd life is described as being more about quantity then quality of living; to live as long as possible as life is transitory. Camus declares that ‘being aware of one’s life, one’s freedom, one’s revolt, and to the maximum, is living, and to the maximum’ (page 60), suggesting that he feels only through realizing the absurdity of life, can one be liberated and live a free life, without the worries of questioning our existence. Everyday life is described as a ‘sleep’ and that the first steps of an absurd  freedom is the ‘escape from everyday sleep’. This means that Camus feels that the only freedom you can have is freedom of though, and action, and this can only be ascertained through the freedom of living an absurd life, that is abandoning your former concepts and ideas and moving past the question of meaning,

The ideas of both philosophical and physical suicide are raised by Camus to highlight the fact that he is concerned whether we can live with this feeling, not with how we overcome it. He suggests that while physical suicide destroys the man that confronts the world, philosophical suicide destroys the view that the world has meaning, in essence destroying the world around us. He proposes that ‘there can be no question of masking the evidence, of suppressing the absurd by denying one of the terms of its equation’ (page 48), which tells us that in essence, physical suicide is the suppression of the desire for meaning, while philosophical suicide is the suppression of these desires by replacing them with other theories and metaphysical reason. Ultimately he is implying that once we move past our desire and quest to find meaning, and when we realise we can’t solve the absurdity of life, we must not let our impending death have any control over us. That is to say, even though life has no meaning, we must not let death influence our decisions to restrain us in any way. Thomas Nagel tells us, however, in contrast that ‘ Philosophical skepticism does not cause us to abandon our everyday beliefs,  but lends them a particular flavour’, pointing out the irony that we realise the meaningless of our lives, but choose to ignore it and carry on.

Camus proposes the notion of the edge of chaos, which portrays his belief that there is a constant struggle to impose order on chaos. He believes the absurd can only exist in the conflict between human search for reason and the irrational order of the universe. Camus declares that ‘ I don’t know whether this world has a meaning that transcends it’ and that there is an ‘impossibility of reducing this world to a rational principle’(page 49), which  affirms his belief that the world is neither rational nor irrational. His solution contrasts with that of Nagel, as Camus expects us to embrace the absurd then rather commit physical nor philosophical suicide, whereas Nagel suggests that you could commit philosophical suicide if you wanted to. Thomas Nagel also advocates the fact that we can end this absurdity, by ‘abandoning one’s earthly, individual, human life in order to identify as completely with that universal viewpoint that life seems arbitary and trivial’. This contrasts greatly with Camus’s preference for people to embrace absurdity, rather then reject it.

Religious affiliation, metaphysical meaning, and constructed philosphies are all rejected as alternative solutions and as a form of philosophical suicide. Camus rejects the idea of a creator or God,  when he states that ‘creation is the great mime’(page 91). Camus alludes to the fact that humans generally can’t cope with a lack of meaning, so they turn to other beliefs such as religion to satisfy their hunger for meaning.  Thomas Nagel portrays that ‘we perceive… an inflated pretension or aspiration which is inseparable from the continuation of human life’, alluding to the fact that human beings generally have high expectations of continued success and happiness, meaning they haven’t realized the absurd.

In conclusion, we can determine that while both Nagel and Camus agreed that life was absurd, they differed on their approaches and solutions. As for life being absurd, we can glean that the desire of humanity to discover a meaning to life can be described as absurd, as there is no balance between this and the rationale of the universe and world. Albert Camus suggests that we can either embrace this absurdity, through his idea of revolt, or we can go down the path of physical or philosophical suicides. Thomas Nagel is less definite in his solution, and he is more blasé in his approach, as he leaves it up to the individual to decide what to do. Albert Camus also tells us that we must rebel, and  revolt against  the inevitable nature of death, as we shouldn’t get caught in the trap of finding no meaning and wasting our days. On the contrary Camus uses death almost as a fuel to inspire the absurd man to live life to its full potential, and find meaning in what we do.