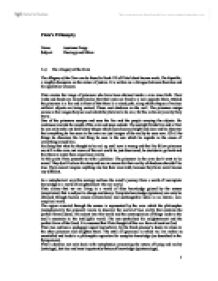 Plato's Philosophy Name: Jousianne Propp Subject: Theology and Ethics 1.a) The Allegory of the Cave The Allegory of the Cave can be found in Book VII of Plato's best-known work, The Republic, a lengthy discussion on the nature of justice. It is written as a dialogue between Socrates and his apprentice Glaucon. Plato creates the image of prisoners who have been chained inside a cave since birth. Their limbs and heads are immobilized so that their eyes are fixed to a wall opposite them. Behind the prisoners is a fire and in front of that there is a raised path, along which shapes of various artificial objects are being carried. These cast shadows on the wall. The prisoners assign names to the images they see and which they believe to be real, for this is the only reality they know. One of the prisoners escapes and sees the fire and the people carrying the objects. He continues towards the mouth of the cave and steps outside. The sunlight blinds him and at first he can only make out dark blurry shapes which soon become bright and clear and he observes that everything he has seen in the cave are just images of the reality he sees now. ...read more.

In contrast, the contemporary approach known as British Empiricism held that all ideas come to us through experience, and thus that knowledge (with the possible exception of mathematics) is essentially empirical. At issue is the fundamental source of human knowledge, and the proper techniques for verifying what we think we know. Rationalists typically argued that, starting with intuitively-understood basic principles, like the axioms of geometry, one could deductively derive the rest of knowledge. The philosophers who held this view most clearly were Baruch Spinoza and Gottfried Leibniz, whose attempts to grapple with the epistemological and metaphysical problems raised by Descartes led to a development of the fundamental approach of Rationalism. Both Spinoza and Leibniz thought that, in principle, all knowledge - including scientific knowledge - could be gained through the use of reason alone, though they both accepted that in practice this wasn't possible for human beings except in specific areas such as maths. Descartes, on the other hand, was closer to Plato, thinking that only knowledge of eternal truths - including the truths of mathematics, and the epistemological and metaphysical foundations of the sciences - could be attained by reason alone; other knowledge required experience of the world, aided by the scientific method. ...read more.

While one horse is of noble breed and well-behaved, the other, is unruly and rebellious. He uses this metaphor to describe the soul's partition in three main parts: The divine part - reason The noble part - courage The reluctant part - desire Plato assigns different virtues to these three components; the soul's first task is to become wise through reason; therefore reason's virtue is wisdom. The soul's second task is to obey reason and it's virtue is bravery and the third task is to control desire, so it's virtue is moderation. Plato places a forth virtue above these three: justice (diakaios�ne). Justice can only be done when the three virtues fulfill their individual tasks as one. In the analogy the charioteer represents reason, which should be in control. The fine horse denotes the noble emotions of the spirited part of the soul (courage) and the disorderly horse represents the passions of the desiring part of the soul. The implications of the analogy are clear: if the charioteer has no horses at all the chariot is never going to move; if you have a two-horse carriage and only one horse is yoked to it, the chariot will go askew immediately, so in order for your wagon to move straight you must have both horses properly harnessed. ?? ?? ?? ?? 1 ...read more.