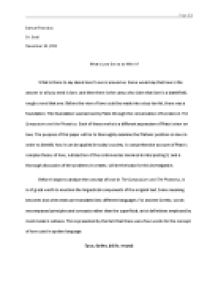 Platonic love. The Symposium and the Phaedrus. Each of these works is a different expression of Plato's view on love.

ï»¿Page | ________________ Samuel Francisco Dr. Gold November 30, 2012 What's Love Got to do With It? What is there to say about love? Love is around us. Some would say that love is the answer or all you need is love, and then there is the camp who claim that love is a battlefield, rough crowd that one. Before the view of love could be made into a top-ten hit, there was a foundation. This foundation was laid out by Plato through the conversation of Socrates in The Symposium and the Phaedrus. Each of these works is a different expression of Plato's view on love. The purpose of this paper will be to thoroughly examine the Platonic position on love in order to identify how it can be applied in today's society. A comprehensive account of Plato’s complex theory of love, a dissection of the controversies involved in interpreting it, and a thorough discussion of the problems it creates, will be the basis for this investigation. Before I begin to analyze the concept of love in The Symposium and The Phaedrus, it is of great worth to mention the linguistical components of the original text. Some meaning becomes lost when texts are translated into different languages. For ancient Greeks, words encompassed principles and concepts rather than the superficial, strict definitions employed by most modern cultures. This is presented by the fact that there were four words for the concept of love used in spoken language: á¼ρως, á¼γÎ¬πη, φιλÎ¯α, στοργÎ® In English these can be translated to eros, agape, philia and storge. Each of these words presents a different concept. ...read more.

In the Phaedrus, Plato introduces a view of eros that is slightly different from that of the symposium. This eros has many faces as it is the unstable, complicated eros found in relationships. This eros is an extension of the problems associated with the body, our emotions and appetites, a divine madness. Socrates establishes the complexity of eros through a reference between iron and silver, just and good (Phaedrus 263b). With the latter topics, each individual has their own arguments of what good/ justice is even within themselves. It is a typical Socratic maneuver to then define what love is by forming an all encompassing definition. What will be evaluated are the speeches of Lysias and Socrates in an effort to summarize Platonic love in The Phaedrus. In the speech given by Lysias, the tone taken is detached and businesslike as he relates the relationship between the lover and the loved: ?Lovers when their craving is at an end repent of such benefits as they have conferred, but fro the other sort no occasion arises for regretting what has passed. For being free agents under no constraint, they regulate their services by the scale of their means, with an eye toward their own personal interest. Again lovers weigh up profit and loss accruing to their account by reason of their passion, and with the extra item of labor expended decide that they have long since made payment for favors received...?(Phaedrus 231-b). It is affirmation the a love is only love inasmuch as it pleases the beloved, and when this passion ceases, so too does the love. He continues in a distinction of the love between two people as an earthly, human bond. ...read more.

I believe that It needs to be a love that is a synthesis of passion and rationality. As the man improves, he will leave irrational inclination aside, resisting the impulse of strong emotion. The love presented by Plato in The Symposium is an entity of goodness that surpasses the usual notion of passion, and in the Phaedrus, it is the unstable menace that we see. Love is infused with our desires for pleasure , well-being, and ease. It is that which will make us whole. Plato reaches for a eros with qualities that transcend our basic notions, an eros with beauty that is absolute! He asserts his egocentric ideas as his love is a progression of the soul, an improvement of self fostered only for the purpose of attaining higher ends. To be put more simply, we only love so that we may achieve a higher goal. This being said, I feel that love is a selfless attainment of things beyond the immortalization of the soul. It is the sacrifice of ones own happiness for the aggregate, so that others may reach a semblance of the good. It is an eros that is neither good or bad, beautiful or ugly, but wise and true. Love, the love that we should aspire to, is something that should be actively sought after. It is more than a byproduct of the good, it is the cause of the good. We see that human love is that for which must strive through an individual's own efforts to be better. As Kant would say, we have a semblance of divine within each of us as we are all members of the kingdom of ends. ¹Henry George Liddell, Robert Scott, A.Greek-English Lexicon, on Perseus ...read more.