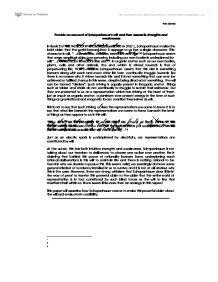 Provide an account of Schopenhauer's will and then assess its strengths and weaknesses.

Provide an account of Schopenhauer's will and then assess its strengths and weaknesses In Book 2 of The World as Will and Representation (Vol.1), Schopenhauer makes the bold claim that the world beyond how it appears to us has a single character. This character is will, "...a mindless, aimless, non-rational urge"1. Schopenhauer asserts that every empirical object we perceive, including our own bodies is underpinned by will,"...a blind force towards some end"2. In organic matter such as our own bodies, plants, cells and other animals, the end which is strived towards is that of perpetuating life; Will zu Leben. Schopenhauer asserts that this aim is something humans along with each and every other life form continually struggle towards. But there is no reason why it strives towards this and it is not something that can ever be achieved or fulfilled; hence in this sense, despite being directed at something, the will can be termed "aimless". Such striving is equally present in inorganic matter. Things such as tables and chairs do not continually to struggle to sustain their existence but they are presented to us as a representation which has striving at the heart of them just as much as organic matter; a persistent ever present energy in the form of such things as gravitational and magnetic forces manifest themselves as will. ...read more.

Upon examination into each and every object - each and every representation - presented to the subject, the conditions that a world of objects must satisfy in order to exist are those of space, time and causality. These are the necessary conditions of experience without which there couldn't be a world for us. Schopenhauer begins to diverge from Kant by noting that our body is one such individuated object; presented to us in space and time, interacting with other objects according to casual laws. However, "...something in the consciousness of everyone distinguishes the representations of his own body from all others that are in other respects quite like it". I am aware of the body I "inhabit" in a way that is different to my awareness of other physical bodies. This distinction "...is denoted by the word will". This can only be fully understood in context of Schopenhauer's explicit rejection of dualism. The idea that a mental act is casually connected to a physical act - for example, that I think to extend my hand and then this is what my body consequently does - is misleading; this is just a cause and effect we observe as representation, just as much as we perceive a brick to cause a window to smash. The fact that our mental state is seen to be 'doing the causing' - as occupying the role of the brick - is no different since our mind is a physical object - a brain - just as much as the brick is. ...read more.

Willing something is synonymous with the physical act itself "The act of will and the action of the body are not two different states objectively known, connected by the bond of causality; they do not stand in the relation of cause and effect, but are one and the same thing, though given in two entriely different ways, first quite directly and then in perception for the understanding" "The action of the body is nothing but the act of the will objectified, i.e. translated into perception" [100] determinism? physical organism and can hence be explained by the will to live A mental representation is distinct from the act of willing This seems initially counter intuitve since often we are faced with situations in which we are torn between a number of actions and can only do one of them could you regard it is a motivational force rather than a cause of action So far Schopenhauer has presented an account of the will in us; he then moves to extend this to account for every representation, the entire empirical world is a manifestation of such will. "Schopenhauer argues that a human being can just as little get up from a chair without a motive to do so than a billiard ball can move on a table before recievieng a push" This amounts to "...a philosophical leap of faith". ...read more.