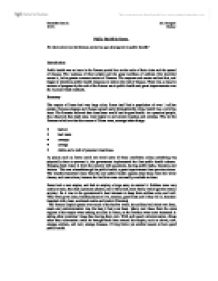 Public Health In Rome. To what extent was the Roman period an age of progress in public health?

Public Health In Rome. To what extent was the Roman period an age of progress in public health? Introduction Public health was an issue in the Roman period due to the scale of their cities and the spread of disease. The vastness of their empire and the great numbers of soldiers who travelled across it, led to greater communication of illnesses. The emperor and senate realised this, and began to introduce public health measures to reduce the risk of disease. There was a massive amount of progress by the end of the Roman era in public health and great improvements over the Ancient Greek methods. Economy The empire of Rome had very large cities, Rome itself had a population of over 1 million people. Because plagues and disease spread easily throughout the cities, health was a very big issue. The Romans believed that cleanliness would lead to good health. As a practical people, they observed that death rates were higher in and around marshes and swamps. This led the Romans to believe that the causes of illness were, amongst other things: * bad air * bad water * swamps * sewage * debris and a lack of personal cleanliness. ...read more.

Also, we see again the role of women in the home as basic healers, often becoming local healers in the poorer areas of the empire. The skills of women here as healers were not disputed and so, breaking from the Greek ideas, women could become doctors and midwives. This was a great step forward for the progression of medicine, but had limited affect on public health. One great improvement that did probably affect public health was that priests were no longer really consulted upon matters of health, the general population was looking more toward practical healing than religious, creating public health, rather than trusting in their gods to keep them well. Theories As the first doctors in Rome were Greek, the Roman doctors to follow them thought similarly about the causes of disease, which were the 4 humours. This was important for public health because the theory of the 4 humours encouraged good personal health and hygiene. In Greece the scale of their cities didn't really force the government to implement public health schemes. But in Rome, how could they have personal health and hygiene when they were surrounded by filth? ...read more.

He wrote many books (60 of them), in which he detailed his new theories and treatments, such as the use of opposites. And although many of his texts were lost in a fire, AD 191 at the Temple of Peace, there were still enough to cover most of his theories and to show his character. As a fiery man, passionate for medicine and philosophy and contemptuous of other doctors for their ignorance and greed. He died in Rome, just after AD 210. Galen's ideas on health, observation of illness and surgery were highly influential with the Emperor (Himself a philosopher). As the emperor believed he had a duty to look after his people, Galen indirectly influenced the public health measures, through Emperor Marcus Aurelius. Conclusion The Roman age was a period of vast progress in public health. They began with similar ideas and technology to the Ancient Greeks, and developed systems of clean water, sanitation, and hygiene that are still in use today. As a result of this progress, the general health of the Roman people improved, but more so for the army and the rich. The theories and methods of those such as Galen dominated medical practice for over 1500 years. ?? ?? ?? ?? Samantha Canvin Mr. Mungles 10DA History ...read more.