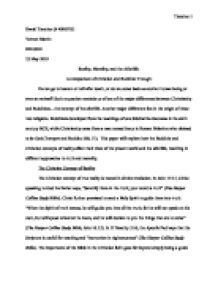 Reality, Morality, and the Afterlife: A Comparison of Christian and Bhuddist Thought

David Thatcher (# 4095075) Vernon Martin RELS201 23 May 2010 Reality, Morality, and the Afterlife: A Comparison of Christian and Buddhist Thought Do we go to heaven or hell after death, or do we come back as another human being or even an animal? Such a question reminds us of one of the major differences between Christianity and Buddhism-the concept of the afterlife. Another major difference lies in the origin of these two religions. Buddhism developed from the teachings of one Siddhartha Gautama in the sixth century BCE, while Christianity came from a man named Jesus in Roman Palestine who claimed to be God (Toropov and Buckles 200, 71). This paper will explore how the Buddhist and Christian concepts of reality affect their view of the present world and the afterlife, resulting in different approaches to truth and morality. The Christian Concept of Reality The Christian concept of true reality is rooted in divine revelation. In John 17:17, Christ speaking to God the Father says, "Sanctify them in the truth; your word is truth" (The Harper Collins Study Bible). Christ further promised to send a Holy Spirit to guide them into truth: "When the Spirit of truth comes, he will guide you into all the truth; for he will not speak on his own, but will speak whatever he hears, and he will declare to you the things that are to come" (The Harper Collins Study Bible, John 16.13). In II Timothy 3:16, the Apostle Paul says that the Scripture is useful for teaching and "instruction in righteousness" (The Harper Collins Study Bible). The importance of the Bible in the Christian faith goes far beyond simply being a guide or record. In Isaiah 8:20, we are told those who do not speak according to the testimony of Scripture have no real enlightenment (Blue Letter Bible). The Christian, then, has no warrant to question Biblical teachings: "Although everyone is a liar, let God be proved true, as it is written, 'So that you may be justified in your words, and prevail in your judging'" (The Harper Collins Study Bible , Romans 3.4b). ...read more.

Our modern society has decided that real truth is that which can be empirically proven; Buddhism is empirical to its core. More and more, the citizens of our world are coming to grips with the destruction of our ecosystem and the interconnectedness of world habitats and climate; Buddhism has the unity of all things as its central tenet. Lastly, the New Age spirituality of today's world (e.g. Oprah) is not so different from Buddhism; both are highly personalized, non-dogmatic, open to new understandings, and do not require the existence of Deity. It is no wonder that the Christian church has been in decline in the West. The Christian Concept of the Afterlife The traditional Christian view of the afterlife has as its foundation the idea of an immortal soul. The Christian concept of immortal soul stands in contrast to the Buddhist idea of no-self. The immortal soul is considered to be self. This self will one day die and be judged (Townsend). Who we are is maintained through death and what we have done is brought into judgment. In Ezekiel 18:20, we are told that the soul that sins shall die (The Harper Collins Study Bible). Yet this death is not annihilation, it is eternal torment, just as the reward for the righteous is eternal (The Harper Collins Study Bible, Romans 2.5-11). Christ said clearly, that consciousness shall not die and the fire will not be quenched for those who are sent to hell (The Harper Collins Study Bible, Mark 9.47-48). In much the same way Satan told Adam and Eve that they would not die if they ate of the tree of the knowledge of good and evil (The Harper Collins Study Bible, Genesis 3). Satan was right, as far as the physical body goes, but through his sleight of speech brought spiritual death upon all mankind. The Apostle Paul states this in Romans 5:12: "...sin came into the world through one man, and death came through sin..." (The Harper Collins Study Bible). ...read more.

Buddhism's view of the afterlife does not include the concept of self, and so the reincarnated being is wholly different from before, and yet the same. This is possible because karma has cast the mental energy into a new life form, either more advanced or less advanced, depending on the nature of the karma. The ultimate goal is to advance one's karma above all life, so that samsara (the cycle of life and death) can be broken, and suffering is ended. The cornerstone of Christian belief concerning the afterlife is the doctrine of an immortal soul and a resurrection. Contrary to Buddhism, this implies the idea of a "self" that will be raised, transformed, and judged. The immortal being of each person will suffer eternal hell or everlasting union with Christ, depending on whether they accepted Christ and His message. In Buddhism, even morality and ethics are subject to whatever appears to be the most harmless course of action. Buddhist morality has as its end the elimination of personal suffering. If one does no harm to others, karma will be created that reduces their own suffering-both now, and in their reincarnation. Christian morality is an offering to God and has as its object the glorification of God. Rather than morality being a vehicle for elimination of suffering as in Buddhism, it becomes a purifying force whereby the Christian experiences the transforming grace of God. In addition, Christianity morality is meant to be evangelistic in attracting unbelievers. In conclusion, we find that Buddhism and Christianity are very different belief systems. Buddhism seems to be more of a philosophy akin to Epicureanism, while Christianity is not rooted in observation but in divine revelation. Perhaps one of the greatest differences is in the concept of self. While Buddhism denies the idea of self and focuses on the concept of "cosmic consequences," Christianity places a lot of stress on self and claims that our "selves" will come into direct judgment. ...read more.