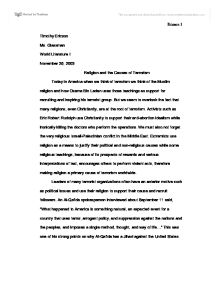 Religion and the Causes of Terrorism.

Timothy Ericson Ms. Glassman World Literature II November 25, 2003 Religion and the Causes of Terrorism Today in America when we think of terrorism we think of the Muslim religion and how Osama Bin Laden uses those teachings as support for recruiting and inspiring his terrorist group. But we seem to overlook the fact that many religions, even Christianity, are at the root of terrorism. Activists such as Eric Robert Rudolph use Christianity to support their anti-abortion idealism while ironically killing the doctors who perform the operations. We must also not forget the very religious Israeli-Palestinian conflict in the Middle East. Extremists use religion as a means to justify their political and non-religious causes while some religious teachings, because of its prospects of rewards and various interpretations of text, encourages others to perform violent acts, therefore making religion a primary cause of terrorism worldwide. Leaders of many terrorist organizations often have an anterior motive such as political issues and use their religion to support their cause and recruit followers. An Al-Qa'ida spokesperson interviewed about September 11 said, "What happened to America is something natural, an expected event for a country that uses terror, arrogant policy, and suppression against the nations and the peoples, and imposes a single method, thought, and way of life..." ...read more.

There is no mention of religion until asked how he justifies his revenge. We can conclude from this that is reasons for attacking America are political while he uses religious seasonings to support his beliefs. Now that we have seen how the leader's of terrorist organizations wrongly use religion to support their political goals we need to understand why they receive so many followers. The Islamic religion does not give the common person the hope of a great afterlife but only with one exception: "As for those who are slain in the cause of God, He will not allow their works to perish. ... He will admit them to the Paradise He has made known to them." (47:4-6). This is how terrorist organizations can recruit so many true religious followers who are actually willing to die for what they think are religious reasons. This is where interpretation can be widely varied. The Christian religion uses a similar but more clear message; if you where persecuted and died because you where a Christian then you are almost guaranteed to go to heaven. ...read more.

The reason why religions can be so controlling over their followers is because they teach them not to question the beliefs of the religion, not to question the preacher and just to obey and accept the rules set forth "by God". The followers believe that this is what God wanted; basically not allowing them to think for themselves because whatever God said is true. "Jesus loves me, this I know, for the Bible tells me so." All religions are based on the conformity of their followers to the values and beliefs of the religion, and it many cases causing some followers to become extremists. Religion is the primary cause of terrorism because of its power to control the individual who is following the religion. The ability to control what people think, believe and act is what many religions have over their followers. Many of these followers take their beliefs too far and start acting out in the only way they know how to get attention, terrorism. The leaders of these terrorist organizations now can control their followers just as religion can control their followers. The leaders now have the ability to control that organization in a way that fits their beliefs, not necessarily those of the religion that is was founded on. Ericson 1 ...read more.