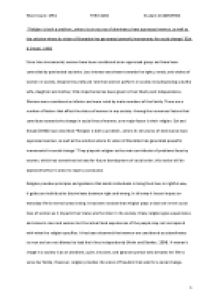 Religion is both a problemwhere its structures of dominance have oppressed women, as well as the solution where its vision of liberation has generated powerful movements for social change. (Eck &amp; Devaki, 1986)

Moreover, if we review Hindu scriptures, it instructs men to give honor to their wives (Pinkham, 1967). Women in Hinduism are viewed as soil where men plant their seeds and allow them to grow (Wadley, 1977). Before marriage, women are controlled by their fathers and later they are controlled by their husbands. During married life, women need to be devoted to their husbands and family (Mukherjee, 1994). Along with household chores women are also responsible for fulfilling all their religious responsibilities. Over time the role of women in Hindu society has changed. A number of changes have been brought about by the ongoing reconstruction of culture and practices. Changes have also been noticed in the education sector, health sector, status of widows, issues concerning early marriages, women?s rights, and representation of women in politics and other governing bodies (Mukherjee, 1994). This revolutionary change in the status of women has had an impact on infant mortality rates and has resulted in better health outcomes. However, there is still a prevailing belief in certain castes that this change is becoming disrespectful towards the Hindu religion, traditions, and principles. Therefore, certain castes still follow traditional roles followed by their ancestors (Mukherjee, 1994). Considering the changes that have taken place, women in Hindu society are now able to lead their lives independently. Women are now allowed to get into professional education along with religious education. But in view of the traditional role that has influenced certain people in Hinduism, some women still have not been accorded status and liberty (Mukherjee, 1994). The social life of Muslim women varies greatly depending on the region they live in and familial traditions that exists. One of the traditions impacting women?s lives is the practice of polygamous marriage. ...read more.

Religion has an influence on women?s liberties for pursuing an education, marriage, divorce, inheritance, witnessing, dressing, and all other daily chores. The inferior status of women in society destroys women?s lives as they have no control over their needs, expectations, and wishes. They live under the power of male members of the family. They are merely confined to their homes and held responsible for looking after their family and children. They do not have any say in the decision making. Moreover, the women who are not able to reproduce or do not give birth to sons are even excluded from the family. The concept of polygamous marriage also deprives women from receiving their basic needs and rights. Thus, the women?s lives are influenced by the religious practices that exist instead of the principles and scripture that religion is based on. However, with the passage of time a number of religions have considered women as equals to men but there are still certain traditional practices that leave women deprived of basic rights. It is evident that there is a dual potential as differences exist in the principles and practices of the people following various religions. These differences eventually have an impact on the lives of women regardless of their religious guidance. Thus, efforts are required at a grand level to discriminate between traditional and actual women?s statuses in society. Eck and Devaki (1986) are accurate to certain extent that ?Religion is both a problem?where its structures of dominance have oppressed women, as well as the solution where its vision of liberation has generated powerful movements for social change.? Religion is the main contributor in most parts of the world for dominance and oppression against women but this had paved way for much development in certain religions, yet awareness needs to be further provided, in order to ascertain that women can practice their rights in every religion and culture. ...read more.