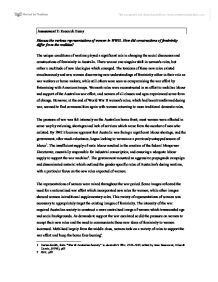 Representations of women during WWII

Assessment 2: Research Essay Discuss the various representations of women in WWII. How did constructions of femininity differ from the realities? The unique conditions of wartime played a significant role in changing the social discourses and constructions of femininity in Australia. There was no one singular shift in women's roles, but rather a multitude of new ideologies which emerged. The tensions of these new roles existed simultaneously and saw women discovering new understandings of femininity either in their role as war workers or home makers; while still others were seen as compromising the war effort by fraternising with American troops. Women's roles were reconstructed in an effort to mobilise labour and support of the Australian war effort, and women of all classes and ages experienced some form of change. However, at the end of World War II women's roles, which had been transformed during war, seemed to find commonalities again with women returning to more traditional domestic roles. The pressure of war was felt intensely on the Australian home front; most women were affected in some way by rationing, shortages and lack of services which arose from the number of men who enlisted. By 1942 it became apparent that Australia was facing a significant labour shortage, and the government, after much reluctance, began looking to women as a previously untapped source of labour1. The insufficient supply of male labour resulted in the creation of the federal Manpower Directorate, essentially responsible for industrial conscription, and ensuring a adequate labour supply to support the war machine2. The government mounted an aggressive propaganda campaign and disseminated material which outlined the gender specific roles of Australian's during wartime, with a particular focus on the new roles expected of women. ...read more.

This was aided by the private sector press, such as the Australian Woman's Weekly which outlined many ways women could help and pictured hard-working women in uniforms, who maintained a strong image of femininity: wearing lipstick and coiffured hair. Women's uniforms were "portrayed as desirably glamorous"12 and the Army publication Salt asserted that ex-servicewomen made 'better wives' in an attempt to encourage women into new roles. These images sought to portray women as being able to serve the war effort, whilst maintaining their socially accepted female roles. There was no doubt a reluctance on the part of women to accept employment for fear of jeopardising their social role by taking on 'male jobs'. The government tried to position women as essential to the war effort, however the reality for many women remained quite different. While some women embraced the new found freedom available with working, others remained reluctant to leave their roles within the home and instead chose to make a voluntary contribution to the war effort. There remained a strong precedent from WWI when women's efforts had been confined to volunteering roles. "Voluntary self-sacrifice continued to be constructed as an essential component of feminine patriotism"13 and this was very much a focus of the female-oriented propaganda produced by the government; especially upper class women who were least likely to take on paid employment. A prominent illustration of this appeared in Melbourne's Herald newspaper encouraging women to follow the example of the fictional character creation of 'Miss X' in balancing work with extensive volunteering14. Women demystified the difficulty of 'men's jobs' and were praised for their exception skill and proficient work there was a higher rate of absenteeism than their male counterparts, indicating women had a difficulty in balancing work with the ongoing commitments of domesticity. ...read more.

The importance of motherhood for women again emerged as a dominant discourse. Notwithstanding this, there was a mixed response between women. While many women were happy to return to these roles, others wanted to retain their newly acquired right to work. However, many returning soldiers felt uncomfortable about their wives or girlfriends working while others claimed that women in the work force would leave no jobs available for men. Some resented the door of opportunity being closed, while others embrace the chance to return to their previous domestic roles. Those women who chose to stay working faced renewed opposition. The war period and post-war years saw significant changes to women's roles as they accepted roles to support the war effort on the home front. It is evident that many women took on jobs that had previously only been available to men, and socially there was an increased awareness of women's employment. This was however perhaps not as widespread as historical accounts suggest and the reality for many women was that they maintained their domestic duties or took on voluntary jobs. Women were also faced with social discourses that were reluctant to embrace the changes of female roles and opposed women taking on traditional male jobs. To some extent women's roles were undergoing an awakening in the 1930s which during the war become prevalent because of the increased focus on women's responsibilities to the war effort. However the reported female promiscuity was hyperbolised in order to maintain a status quo. Evidently, despite the changes that women's roles underwent during the war, the post-war period saw a quick return to traditional domestic roles. The representations of women's roles during the war years were varied and evidently the constructions of femininity often differed from the reality. ...read more.