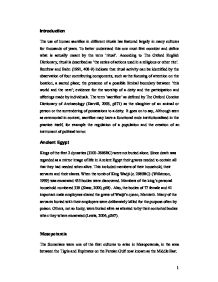 Ritual human sacrifice. The use of human sacrifice in different rituals has featured largely in many cultures for thousands of years. To better understand this one must first consider and define what is actually meant by the term ritual.

Introduction The use of human sacrifice in different rituals has featured largely in many cultures for thousands of years. To better understand this one must first consider and define what is actually meant by the term 'ritual'. According to The Oxford English Dictionary, ritual is described as 'the series of actions used in a religious or other rite'. Renfrew and Bahn (1991, 408-9) indicate that ritual activity can be identified by the observation of four contributing components, such as the focusing of attention on the location, a sacred place; the presence of a possible liminal boundary between 'this world and the next'; evidence for the worship of a deity and the participation and offerings made by individuals. The term 'sacrifice' as defined by The Oxford Concise Dictionary of Archaeology (Darvill, 2003, p371) as the slaughter of an animal or person or the surrendering of possessions to a deity. It goes on to say, Although seen as ceremonial in context, sacrifice may have a functional ends institutionalized in the practice itself, for example the regulation of a population and the creation of an instrument of political terror. Ancient Egypt Kings of the first 2 dynasties (3100-2686BC) were not buried alone. Since death was regarded as a mirror image of life in Ancient Egypt their graves needed to contain all that they had needed when alive. This included members of their household, their servants and their slaves. When the tomb of King Wadji (c. ...read more.

The man who captured the victim would then take parts of the body to be eaten during a ceremonial feast (Smith, 1996, p222-5). In the 1487 re-consecration of the Great Pyramid of Tenochtitlan some estimate 80,400 prisoners were sacrificed (Harner, 1977, p46-51), Another rather gruesome but very symbolic sacrificial ritual was performed by the Aztecs to a deity called Xipe Totec (translated, Lord of the flayed skin). According to Moctezuma & Olgu�n (2002, p54-5) and Fern�ndez (1996, p60-63) Xipe Totec was an important symbol of fertility; war and the coming of age of young warriors a life-death-rebirth deity, god of agriculture, vegetation, the east, disease, spring, goldsmiths, silversmiths and of the seasons. There were two documented types of ritual sacrifice to Xipe Totec, both ending in the same way but the manner of the victims ritual slaying being different. These were the gladiator sacrifice and the arrow sacrifice. The arrow sacrifice consisted of tying a victim to a wooden frame with his arms and legs spread (the frame represented a corn plant) a priest would then fire arrows at the victim to kill them thus making the victims blood then flow onto the ground represented the cool rains of spring (Meyer & Sherman, 1995, p69). In the gladiator ritual, the captive was tied to a large stone, given a sword with a mock blade made of feathers, and forced to fight a fully equipped opponent. After these ceremonies, the victim's skin was removed so that it could be worn by the Xipe Totec priests (Smith, 1996, p225) ...read more.

Above this a line of horsemen ride away from the cauldron after their sacrifice to there afterlife. Deem wonders if this is scenes depicting a sacrifice to thank the gods for a victory or they are attempting to divinate the future. Conclusion Ritual human sacrifice appears to have been used in past societies for a number of reasons, with not all the victims being unwilling pawns at the mercy of unscrupulous priests. We have seen demonstrated here that loyal retainers gave their lives willingly to travel to an 'after' life and serve there master or mistresses there as they had done in life. This believe in an after life must have been exceptionally strong in the servants and followers of these kings and queens. Fertility rites were recognised and performed in the form of sacrifices from what would appear to be since there has been written records, some of these rites committed on such a large scale that like in the case of the Aztecs they would have had a noticeable effect upon the population numbers and were done in full view of the people with the blessing of the ruling authorities. Some of the human sacrifices were to thank the gods for strength in battle and a victory over an enemy (usually ending with the loser being sacrificed to the winner's god or gods). Finally, and even though not always intentionally ritual human sacrifice committed by an all powerful priesthood or state would have instilled fear into the general population of a society making it people much more malleable and easier to control. ...read more.