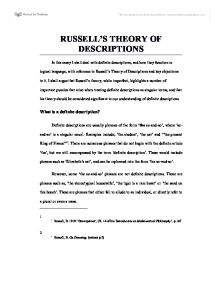 If one said 'the owner of the horse', it would clearly mean 'there is x, such that x owns the horse and only x owns the horse, and x loves the horse. The phrase "the owner of a horse" acts like an ambiguous description, and "there is someone particular, who owns a horse and loves that horse most of the time" is a fairly unnatural reading. It would be interesting to see how Russell might deal with this challenge, but it does not seem manifest as an important objection. A second objection is that of definite descriptions where a particular, but not unique item is being talked about, and it is not clear which particular item this is. For example, 'the tea towel needs washing'. This usage definite descriptions can be clarified by some unspoken knowledge, such as if the speaker knows of a particular tea towel that is particularly dirty, he has mentally tagged that item as unique, and can refer to it as 'the tea towel'. However, an outsider would have trouble working out which tea-towel he was talking about. Again, this is not a considerable objection to the fundamentals of theory, but it would be interesting to see how Russell might respond to it. I feel that, in general, Russell's Theory of Descriptions is comprehensive and detailed, effectively taking into account the normal behavior of definite descriptions. It provides a robust hypothesis for the functioning of definite descriptions, despite some need for clarification in the cases highlighted here. These irregularities can be seen as a challenge, rather than a refutation of the core of the theory. ...read more.