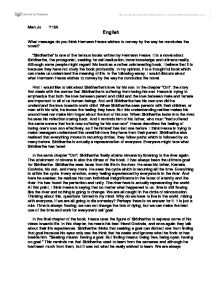 Siddhartha - What message do you think Hermann Hesse wishes to convey by the way he concludes the novel?

Man Ju Y13A English What message do you think Hermann Hesse wishes to convey by the way he concludes the novel? "Siddhartha" is one of the famous books written by Hermann Hesse. It is a novel about Siddhartha, the protagonist, seeking for self-realization, inner knowledge and ultimate reality. Although some people might regard this book as a rather uninteresting book, I believe that it is because they have not study the book profoundly. In my opinion, it is a thoughtful book which can make us understand the meaning of life. In the following essay, I would discuss about what Hermann Hesse wishes to convey by the way he concludes the novel. First I would like to talk about Siddhartha's love for his son. In the chapter "Om", the story first deals with the sorrow that Siddhartha is suffering from losing his son. Hesse is trying to emphasize that both the love between parent and child and the love between male and female are important to all of us human beings. Not until Siddhartha has his own son did he understand the love towards one's child. When Siddhartha sees parents with their children, or man with his wife, he knows the feeling they have. ...read more.

It is just a rule. Time is always flowing, we can not change the fate of dying, but we can make the best use of the time and work for everyone's self goal. In the final chapter of the book, Hesse uses the figure of Siddhartha to express some of his views towards life. In this chapter, he meets his best friend Govinda, and once again they talk about their life experiences. Siddhartha thinks that seeking a goal can distract one from finding that goal because his eyes only see the think that he seeks and ignores what he finds or has beside him. "Seeking means: having a goal. But finding means: being free, being open, having no goal." This reminds me that Siddhartha used to learn from the samanas and although he had leant much from them, but it was not what he really wished to learn. We are always seeking and learning, but at the same time dissatisfied with what we have learnt. Perhaps that is because we seeks too much and not seeing what was right in front of us. Siddhartha also says to Govinda that "knowledge can be communicated, but not wisdom." ...read more.

Siddhartha loves the world. "This is why that which is seems good to me, death seems like life, sin seems like saintliness, cleverness like foolishness, everything must be like that...I learned how to let the world be as it is, and to love it and belong to it gladly." I think Hesse is trying to persuade people to love the world. Respect each other instead of hating each other. I believe that Hesse himself does love the world. When Govinda asked for a final word to take along on his way, Siddhartha told him to kiss him on the forehead. Staring into Siddhartha's face he sees a river, as Siddhartha had seen upon the face of Vasudeva, flowing with thousands of faces merging together and separating. Govinda now sees the recurring of everything in the world by staring into the perfect one. Here, Siddhartha could be representing the world where everyone lives in it. He is no more selfish but he loves everything he sees. I think Hesse wishes that everyone in the world could think and act like Siddhartha, and the world would attain perfection. The ending of this novel indeed makes every reader think about the meaning of life. And that would be the final thing which Hesse hope to convey through this novel. ...read more.