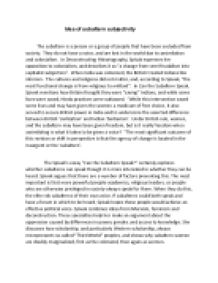 Ã¯Â»Â¿Idea of subaltern subjectivity The subaltern is a person or a group of people that have been excluded from society. They do not have a voice, and are lost in the world due to assimilation and colonialism. In Deconstructing Historiography, Spivak expresses her opposition to colonialism, and describes it as â€œa change from semi-feudalism into capitalist subjectionâ€. When India was colonized, the British treated Indians like inferiors. The cultures and religions did not matter, and, according to Spivak, â€œthe most functional change is from religious to militantâ€. In Can the Subaltern Speak, Spivak mentions how Britain thought they were â€œsavingâ€ Indians, and while some lives were saved, Hindu practices were outlawed. â€œWhile this intervention saved some lives and may have given the women a modicum of free choice, it also served to secure British power in India and to underscore the asserted difference between British â€˜civilizationâ€™ and Indian â€˜barbarismâ€™. Under British rule, women, and the subaltern may have been given freedom, but is it really freedom when assimilating is what it takes to be given a voice? ...read more.

In Spivak's words: â€œIf, in the context of colonial production, the subaltern has no history and cannot speak, the subaltern as female is even more deeply in shadow." For Spivak, women are silenced by both colonialism and patriarchy. Spivak argues that the case of Indian sati is illustrative of how the subaltern cannot speak. She asks, "What did Sati say?" Can the subaltern be understood? Or is it always a "speaking for?" Sati was understood either, through the English, as the slaughter of innocent women or, through the male Hindus who spoke for the female Indians, as a voluntary act. In other words, the subaltern in this instance, the Indian women, have no voice. The widow's act is never considered a form of martyrdom, "with the defunct husband standing in for the transcendental One." It was just considered a crime. The nationalist Indians accepted the British reading of sati, and made it a point to reclaim the practice. ...read more.

A poor peasant can say: "No matter how hard I work; my family does not have enough to eat." But will this be heard in a way that can begin to effect change? For speech to be successful, it must transmit its message. For Spivak, subaltern speech does not achieve this. Spivak in Can the Subaltern Speak and Deconstructing Historiography talks about how people oppressed by colonialism are not allowed a voice because they do not have importance to be heard. Women act out in acts of violence to make a point, and no one understands or does anything to change the way the subaltern is being treated today. women are objectified by society and men, and because of their â€œcultureâ€ it is considered acceptable. Women, the oppressed, the uneducated, the poor, and the subaltern group as a whole are treated unfairly, and need to be heard. They have stories that should not be considered trivial just because of their gender or socioeconomic status. These people need to be heard, but are they heard, can the subaltern speak? ...read more.