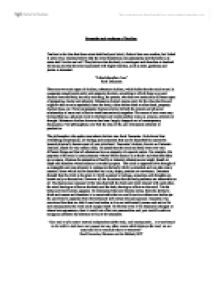 Strengths and weakness of Dualism

Strengths and weakness of Dualism Dualism is the idea that there exists both body and mind, distinct from one another, but linked in some way. Dualists believe that the mind determines our personality and the body is an outer shell for the real self. They believe that the body is contingent and therefore is destined for decay, but that the mind associated with higher realities, such as truth, goodness and justice is immortal. "I think therefore I am" Ren� Descartes There are two main types of dualism, substance dualism, which holds that the mind or soul is a separate non-physical entity and property dualism, according to which there is no soul distinct from the body, but only one thing, the person, who has two irreducibly different types of properties, mental and physical. Substance dualism leaves room for the idea that the soul might be able to exist separately from the body, either before birth or after death, property dualism does not. However property dualism allows for both the mental and physical relationship of cause and effect to work harmoniously together. ...read more.

and still remain the same person. Descartes was convinced that that we didn't need our bodies to live an intellectually aware and active life and consequently the mind could escape death. He felt that even if we drastically changed or altered our appearance, then it would not affect our personalities and you would be able to recognise someone by reference to his or her character. "Our soul is of a nature entirely independent of the body, and consequently... it is not bound to die with it. And since wee cannot see any other cause which destroys the soul, we are naturally led to conclude that it is immortal" Ren� Descartes, Discourse on the Method, 1637 Dualism has received a lot of attention in the past and Descartes has not been the only philosopher who has written on dualism. Great names such as Plato, Aristotle and Aquinas have all put forward their ideas on the subject each one differing slightly. Plato believed that the soul belonged to a level of reality that was higher of that of the body. He stated that the soul was immortal and this derived from his theory of ideas, which he called forms. ...read more.

Aquinas agreed with Aristotle in the sense that he thought that the soul animated the body and gave it life and he called the soul the 'anima'. Aquinas believed that that the soul operated independently of the body and that things that are divisible into parts, are destined to decay. As the soul isn't divisible it is able to survive death. However because of the link with a particular human body, each soul becomes individual so even when the body does die, the soul once departed still retains the individual identity of the body it once occupied "Now that the soul is what makes our body live; so the soul is the primary source of all these activities that differentiate levels of life: growth, sensation, movement, understanding mind or soul, it is the form of our body" St Thomas Aquinas, Summa Theologica It may seem like these philosophers have found the answer to the mind-body problem, however...... there are many things that question the theory of dualism monism is a pefect example Schopenhauer called the mind-body problem "the world knot" a puzzle that is beyond our capacity Neither dualism or monism seems likely to be true, but it isn't clear what the alternatives are ...read more.