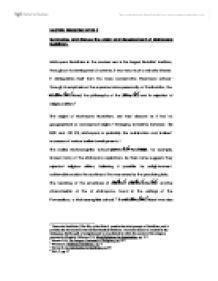 Summarise and discuss the origin and development of Mahayana Buddhism.

EASTERN RELIGIONS LEVEL 2 Summarise and discuss the origin and development of Mahayana Buddhism. Mahayana Buddhism in the modern era is the largest Buddhist tradition, throughout its development, however, it was very much a minority interest. It distinguishes itself from the more conservative Theraveda school,1 through its emphasis on the supramundane personality of the Buddha, the Bodhisattva ideal, the philosophy of the Shunyata, and its rejection of religious elitism.2 The origins of Mahayana Buddhism, are very obscure as it has no geographical or conceptual origins.3 Emerging sometime between 150 BCE and 100 CE, Mahayana is probably the culmination and indirect successor of various earlier developments.4 The earlier Mahasanghika school (Universal Assembly), for example, shared many of the Mahayana aspirations. As their name suggests they rejected religious elitism, believing it possible for enlightenment achievable outside the confines of the monastery by the practicing laity. The teaching of the emptiness of dharmas (dharmasunyata), another characteristic of the of Mahayana, found in the writings of the Purvasailous, a Mahasamghikis school.5 The Bodhisattva ideal was also held by other earlier schools, such as the Mahasamghikis, and the Sarvastivadius.6 Mahayana Buddhism was not the sudden inspiration of any one individual, neither was it a rival school; the product of sectarian disagreement. Mahayana developed over a long time; inscriptural evidence suggests it originated as a minority spiritual interest within the confines of the monastery.7 As a consequence Mahayana emerged as a loose group of movements; diverse in teaching and practice. ...read more.

to attain.24 The path itself requires the practice and development of perfection's (paramita's), and progression through ten Bodhisattva stages (bhumi's).25 26 Enlightenment itself is a circular process, so even when the Bodhisattva achieves this end, paradoxically it is still there to achieve. In the early Buddhist teaching the last requirement of the `Eight Fold Path' was that of `Right concentration' that encompasses compassion, and it is this quality that enlightened beings are said to exhibit. Mahayana interpreted this compassion as the enlightened Bodhisattvas choose not to cross into Nirvana, but remaining to help others in their enlightenment. This compassion is not the Bodhisattvas purpose, as the Bodhisattva does not ideally have one, but enlightenment. The Bodhisattva, desire's enlightenment not for themselves but for the sake of others.27 In their compassion the Bodhisattva can also transfer the karma of their past meritorious acts to help others. Also if helping others requires the engaging in sin, or spending time in hell the Bodhisattva is encouraged to do this. Here, however, lies a problem as there is no strict moral code to restrain or guide to Bodhisattva in these situations.28 Ideally the compassion, purifying meditation and the belief in the results of karma, is believed to guard against licence The wisdom the Bodhisattva accumulates also tempers any self-seeking actions.29 In reality, however, the path of the Bodhisattva can be abused, which yields a loose sense of trust and morals. Developing along side the Mahayana's notion of Buddhology and the ideal of the Bodhisattva was an accompany philosophy, which among other subjects of concern speculated on the nature of the Bodhisattva's goal, that is, knowledge of dharma-kaya or emptiness in the form of the ultimate Omnipresent Buddha. ...read more.