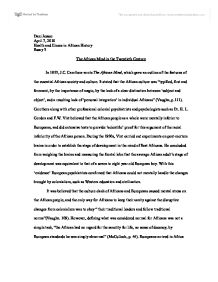 The African Mind in the Twentieth Century

Dani Jessee April 7, 2010 Health and Illness in African History Essay 3 The African Mind in the Twentieth Century In 1953, J.C. Carothers wrote The African Mind, which gave an outline of the features of the essential African society and culture. It stated that the African culture was "typified, first and foremost, by the importance of magic, by the lack of a clear distinction between 'subject and object', and a resulting lack of 'personal integration' in individual Africans" (Vaughn, p.111). Carothers along with other professional colonial psychiatrists and psychologists such as Dr. H. L. Gordon and F.W. Vint believed that the African people as a whole were mentally inferior to Europeans, and did extensive tests to provide 'scientific' proof for this argument of the racial inferiority of the African person. During the 1930s, Vint carried out experiments on post-mortem brains in order to establish the stage of development in the mind of East Africans. He concluded from weighing the brains and measuring the frontal lobe that the average African adult's stage of development was equivalent to that of a seven to eight year old European boy. With this 'evidence' European psychiatrists confirmed that Africans could not mentally handle the changes brought by colonialism, such as Western education and civilization. ...read more.

Populations accustomed to the monthly or biennial visits of European doctors saw Algerian doctors settling permanently in their villages. The revolution and the medicine manifested their presence simultaneously" (Fanon, p.142). Thomas Adeoye Lambo was Nigeria's first European trained psychiatrist of indigenous descent. Lambo is most known for his successful experiment at the Aro Mental Hospital in Abeokuta during the 1950s through 1960s. Adeoye Lambo understood that the previous European methods of dealing with Africans with mental illness were insufficient, so he began his own out-patient treatment services at the Aro village, initiating the first uses of modern healing techniques with traditional religion and native medicines. Lambo, while at Aro, received help from farmers near the asylum who took several of the patients as laborers, while additionally undergoing medical treatment, the patients also had to pay for any further services such as housing. He traveled around the country and brought in a few traditional healers from different parts of Nigeria. His style helped reduce public mistrust of mental health hospitals and brought the care and treatment of mentally ill citizens into the public eye, "understanding indigenous African cultures was not only important in terms of diagnosing mental illness in African patients. ...read more.

'Brain fag' is now generally considered to be a depressive disorder that could possibly be linked to multiple anxiety disorders. Psychiatry in Africa has come a long way since the beginning of the twentieth century. European psychiatrists that worked in Africa during the colonial period held to the belief that Africans could not suffer from depression because of the assumption that Africans lacked the capability to be self-reflective or self-critical and therefore a mental disease like depression wasn't possible to develop in the African mind. Later, research during the 1950s showed that this view was nonsense. European psychiatrists developed 'scientific' comparisons between the European and African brain that have now been proven completely invalid and solely based on racial differences. Africans, along with all the people throughout the world, suffer from a wide variety of universal mental disorders. Psychiatry in Africa in the 1950s and 1960s began to switch over into the hands of native Africans and helped lead to independence and decolonization. Although there were many great breakthroughs and improvements in the quantity and quality of scientific knowledge in the psychiatric profession, the main thing that changed the view of Africans as mentally inferior lied within the political and social revolutions occurring in Africa in the nineteen hundreds. ...read more.