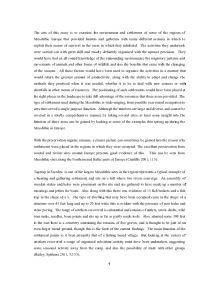 The aim of this essay is to examine the environment and settlement of some of the regions of Mesolithic Europe that provided hunters and gatherers with many different avenues in which to exploit their means of survival in the areas in which they inhabited. The activities they undertook were carried out with great skill and mostly definitely organised with the upmost precision. They would have had an all round knowledge of the surrounding environment, the migratory patterns and movements of animals and other forms of wildlife and also the benefits that came with the changing of the seasons. All these factors would have been used to organise the activities in a manner that would return the greatest amount of productivity, along with the ability to adapt and change the methods they practised when it was needed, whether it to be to deal with new sources or with shortfalls in other means of resources. The positioning of such settlements would have been placed at the right places in the landscape to take full advantage of the resources that these areas provided. The type of settlement used during the Mesolithic is wide-ranging, from possible year round occupation to sites that served a single purpose function. Although the numbers are large and diverse, and cannot be covered in a totally comprehensive manner, by taking several sites, at least some insight into the function of these areas can be gained by looking at some of the examples that sprang up during the Mesolithic in Europe. ...read more.

High amounts of water chestnut, hazelnuts a large amount of hemp seeds and pollen indicate some areas of land were possibly cleared for some form of cultivation (Bailey, Spitkens 2009, 35). In north western Russia many sites are located along wetland areas of lakes such as the Vozhe and Lacha lakes. The largest of these at Lacha, consisted of three large post framed rectangular dwellings in an area covering nearly 1500 square metres. These had a one or two hearths inside the house and a further two near the dwellings. Also storage pits and a ritual pit was present, which contained a birch trunk with an elk skull attached. Animals included elk, beaver, and swan and also pike was common among the remains. A bog in the region also turned up the remains of ornamented bows, skis, a sledge as well as items such as a fishing basket and a net made from sedge (Bailey, Spitkens 2009. 295). Also the evidence of trade in certain materials native to a specific region been traded around the Baltic and Scandinavia. This may have been facilitated with the use of skis and sledges during winter and boats in the summer. Items included amber being moved from southern to northern Scandinavia, the trading of pumice from Norway to southern parts of Scandinavia and a range of other materials from seal oil between islands in the Baltic to green Olonets between Finland and northwest Russia (Bailey, Spitkens 2009, 35). ...read more.

In relation to this, much of the evidence for settlement may be lost to areas been subjected erosion and change and much of the material covered by alluvial or peats deposits (Barry 2000, 9). These examples, though only a small fraction of many types around Europe, represent in a broad sense the organisation that existed in settlements around Mesolithic Europe. It shows the importance that was put upon that coastal and rivers and also the role that the inland played in some areas in the purpose of other means subsistence. Although these types of settlement present a picture of organisation and a form of settlement that would not normally be linked to the idea of roaming hunter and gathers. This does not mean of course that everyone returned to the same place every night in time for evening supper. Looking at the situation in Ireland regarding settlement, or clear evidence of it, does not mean that the inhabitants of Ireland where any less complex than their neighbours in Britain or Europe. People are not stupid even if they lived some 10,000 years ago, quite the contrary the knowledge and skills possessed by not only people in Ireland but across Europe regarding the environment they inhabited would easily put a modern human to shame. Simple logic within humans or any other species will dictate that any area providing abundance in resources and food supplies necessary for survival will be the focus of constant attention and therefore encourage some form of settlement. ...read more.