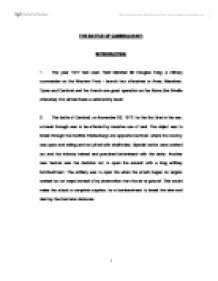 THE BATTLE OF CAMBRAI

THE BATTLE OF CAMBRAI (1917) INTRODUCTION 1. The year 1917 had seen Field Marshal Sir Douglas Haig; a military commander on the Western Front - launch four offensives at Arras, Messines, Ypres and Cambrai and the French one great operation on the Aisne (the Nivelle offensive). Not all had been a satisfactory result. 2. The battle of Cambrai, on November 20, 1917; for the first time in the war, a break through was to be effected by massive use of tank. The object was to break through the horrible Hindenburg Line opposite Cambrai, where the country was open and rolling and not pitted with shell-holes. Special tactics were worked out and the infantry trained and practised beforehand with the tanks. Another new feature was the decision not to open the assault with a long artillery bombardment. The artillery was to open fire when the attack began on targets worked out on maps instead of by observation from the air or ground. This would make the attack a complete surprise, for a bombardment to break the wire and destroy the Germans defences. 3. The Cambrai plan had been produced by Britain's chief tank expert, Colonel Fuller and Byng had gone along with him on idea that it could bring dramatic mobility to the static front, with its grim positional warfare. Both agreed that the country chosen was ideal for tanks. 4. The Battle of Cambrai provides a useful illustration of the application of the principles of war and the basic fundamentals both at tactical and operational levels within the Army and at the strategic levels between the tri services. It also showed that a major factor in the victory of First and Second World War was the influence by this battle. Apart from that, the deception operations were numerous and considered being an important aspect in the conduct of the battle. This battle also provides the pertinent points, which had been given priority by both the Allied commanders and their counterpart prior to their conduct of the battles. ...read more.

in World War I were just that-pure tank formations of up to brigade size, intended for attachment to infantry units rather that for independent combined arms mechanised operations of their own. LEVELS OF CONFLICT 20. Cambrai's Strategic Plan. General Sir Julian Byng, the commander of the British Third Army, was directed in mid-September of 1917 to organize an offensive to siphon German power from the Ypres sector. Byng and General Sir Hugh Elles, a commander of the Royal Tank Corps, turned to a proposal made in August by Colonel J.F.C. Fuller, chief general staff officer, later a well-known military writer. Since tanks had proved worthless before, Fuller had searched for and found dry ground where mobile armour could be deployed in large numbers and with immense impact. Byng's plan was however: a. To break the German defensive system, the famous Hindenburg Line, in the neck between the Canal de L'Escaut and the Canal du Nord. b. To seize Cambrai, Bourlon Wood and the passage over the Sensee. c. To cut off the Germans in the area south of the Sensee and west of the Canal du Nord, and d. To exploit the success towards Valenciennes. 21. Cambrai's Tactical Plan. Byng's objective was the Hindenburg Line. Therefore the main tactical purpose of the assault was to make a frontal smash along a six-mile front, to bag all the Germans found between the canals, and to capture the town of Cambrai. There were no secondary objectives. The British were not intent upon a decisive breakthrough; the tactical strike was in fact a feint to divert German strength from their lines elsewhere. THE TANK WARFARE 23. At 0620 on 20 November 1917, a British gun in the Cambrai sector fired a single shell into the German lines. It was the signal for a 1000 gun barrage, which fell on the German front line, causing most of the defenders to retreat to their bunkers to await the infantry assault. ...read more.

So further pursuit was not possible. If fresh tanks had been available to take up the pursuit at the end of the first day, the result might be different. CONCLUSION 42. The Battle of Cambrai ended the fighting on the Western Front in 1917. It was the darkness year of the war for the Allies. The losses in France had been tragically heavy and the gains small. Russia, the mighty ally had suffered revolution and had made her peace with Germany, who could use all her military might on the Western Front. The French Army was in bad shape, with mutiny general and the commanders were struggling to reawaken the French Army's great fighting spirit. The Battle of Cambrai was the type of the battle in the future and its influence on the Second World War was as great as that on remainder of the First. 1 David Scott - Daniel, World War 1, Ernest Benn Ltd, London, p. 95. 2 Simon Ransford, War Machines Land, Berkeley Publisher Ltd, Hong Kong, p. 118. 3 David Scott - Daniell, World War 1, Ernest Benn Ltd, London, p. 98. 4 Singer. A history of technology, Clarendon, Oxford. p. 27. 5 Ibid. p. 29. 6 Ibid. p. 31. 7 Ibid. 8 Sir Llewettyn Woodward, Great Britain and The War of 1914-1918, Methuen & Co Ltd, London, 1967, P 300. 9 The lack of mobility was increased by the heavy weight - 72 pounds - of equipment carried by the infantry. The lessons of the Somme might indeed have led to earlier experiments in armoured carrier to bring up equipment and possibly the men themselves. The weight carried at Cambrai was in fact four pounds heavier per infantryman than at the Somme. 10 In Aug 1917, an increased establishment of officers and men for the Tank Corps, though approved by Haig, was postponed owning to the heavy demands of the infantry to replace their losses. At the same time, GHQ ordered Haig to sent division strength to Italy for reinforcement. 1 1 ...read more.