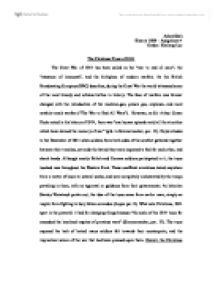 Ashay Shah History 118B - Assignment 4 Grader: Xiaxiang Luo The Christmas Truce of 1914 The Great War of 1914 has been called as the "war to end all wars", the "massacre of innocents", and the birthplace of modern warfare. As the British Broadcasting Company (BBC) describes, during the Great War the world witnessed some of the most bloody and ruthless battles in history. The face of warfare was forever changed with the introduction of the machine-gun, poison gas, airplanes, and most notably trench warfare ("The War to End All Wars"). However, as Sir Arthur Conan Doyle noted in his history of 1914, there was "one human episode amid all the atrocities which have stained the memory of war" (qtd. in Simmermacher, par. 11). Doyle alludes to the December of 1914 when soldiers from both sides of the conflict gathered together between their trenches, set aside the hatred they were expected to feel for each other, and shook hands. Although mostly British and German soldiers participated in it, the truce touched men throughout the Western Front. These unofficial armistices lasted anywhere from a matter of hours to several weeks, and were completely orchestrated by the troops partaking in them, with no approval or guidance from their governments. ...read more.

These common links allowed enemies to identify with each other making it possible to have relations with an opposing soldier. Before Christmas Eve there had been several premonitions and even requests that a truce would take place on the Front. Accompanying these requests were stern orders from the headquarters of either side, outlawing such fraternization. . The plea came from the newly elected Pope, Benedict XV, who asked the warring nations to respect the time of Christmas and set the differences aside. The plea was recorded by the Russian ambassador of the time in his memoirs: "Pope Benedict XV has asked the Russian Government if it will consent to a suspension of hostilities during Christmas Day" (Paleologue, entry for Sunday, Dec. 6th 1914). This proposal, although accepted by Germany, was not respected by all the nations and was subsequently forgotten. Yet, both British and German commanders were wary of the ever-growing companionship between soldiers at the front so issued instructions intended to counteract such conduct. Such orders can be seen in the diary of Sir Horace Smith-Dorrien, Commander of the British II Corps, "The Corps Commander...impresses the absolute necessity of encouraging the offensive spirit of the troops...Friendly intercourse with the enemy and unofficial armistices are absolutely prohibited" (qtd. in Rosenberg, par. 10). ...read more.

One of the more famous accounts comes from Captain Charles Stockwell, who supervised the truce in his section of the front. Morgan describes, "On Dec. 26th, at 8:30A.M, he fired three shots in the air. The German captain appeared on the parapet. They both bowed and saluted. He fired two shots in the air-and the war was on again." (qtd. in Morgan, par. 15). Such a blunt yet precise comment depicted the suddenness with which the truce ended, and the humanity of the soldiers was set aside as war began again. In late December 1914, many British and German soldiers put down their guns, overcame the aggression and contempt associated with the war, and in a historic display of humanity met each other on the battlefield. This occurrence, although brief, caused serious trouble to the governments and commanders of those involved. There was the potential for a "revolution from the streets" and possibly an end to the war. However this may not have been entirely beneficial. Governments would have failed and there might have been rebellion from conflicting factions (Lopez, par.16). For Christmas 1915, authorities had taken precautions, such as continuous trench bombardments and heavy artillery fire, to constrain fraternization and truces. However, for a few days in one of the worst wars in human history, soldiers identified with each other, shook hands, and maybe even played a little "footy". ...read more.