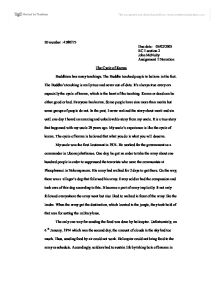 The Cycle of Karma

ID number : 4580175 Due date: 05/02/2003 EC 1 section 2 John McNulty Assignment 1:Narration The Cycle of Karma Buddhism has many teachings. The Buddha teached people to believe in the fact. The Buddha's teaching is really true and never out-of-date. It's always true every era especially the cycle of karma, which is the heart of the teaching. Karma or deed can be either good or bad. Everyone has karma. Some people have sins more than merits but some groups of people do not. In the past, I never realized the story about merit and sin until one day I heard an amazing and unbelievable story from my uncle. It is a true story that happened with my uncle 29 years ago. My uncle's experience is like the cycle of karma. The cycle of karma is believed that what you do is what you will deserve. My uncle was the first lieutenant in 1974. He worked for the government as a commander in Ubonrajchathanee. One day, he got an order to take the army about one hundred people in order to suppressed the terrorists who were the communists at Phoophannoi in Nakornpanom. His army had walked for 2 days to get there. On the way, there was a villager's dog that followed his army. ...read more.

My uncle who was the first lieutenant in that time and the commander of the army saw many cows were frightened and scattered with the sad feeling. A cow was shot around left leg by the sergeant. About two hours later, the hunting group was back to the hill with uncooked beef which already sliced. The beef could treat the army at least 2 days. The next night which was on 11 st January, 1974 the terrorists attacked his army. The terrorists shot from the west military base. He ordered to shoot back about 10 minutes before the shot had stopped. The next morning, a group of his soldiers had need to go down to the foothill in order to bring the freshwater. He knew very well that shooting of the enemy from the west last night was a feint. The terrorists usually hide the bomb at the opposite side, which probably was the east side of his military base. Therefore, he was the leader to go down for more safety and encouragement of his soldiers. He took ten soldiers to foothill by himself. He walked in front of the army with the dog, which followed closely. He dressed in soldier suit, which was ready to make a war. ...read more.

If he steps on the bomb by himself, I probably don't have my uncle today. Furthermore, there's still an infinitive sin about this event. When my uncle got an operation at hospital, he got the most torture in his life. The doctor said, " I'm sorry. The anaesthetic is all used up. We don't have the anaesthetic anymore." All the injured people had to sew the wounds without the anaesthetic just like the cow, which was sliced while it was alive. After this event, my uncle has cursed furiously about all kinds of cruelty. He is afraid of doing again. Nowadays, he intends to make a lot of merits. He has had the determination, which follow the teachings of Buddhism forever. If you do a good deed, you will get a good thing turn back to you. Similarly, if you do a bad deed, then the bad deed will serve you. Everything has cause and effect each other. This is the one thing that I can learn from my uncle's experience. Deed may exists. Noboby can avoid deed. You cannot get rid of your deed but you can decrease your deed to relieve in a better way. If you wish you make a merit, today is not too late. Do not hesitate before making merit but please hesitate before doing a sin. Think carefully before you do something because you will deserve it someday. ...read more.