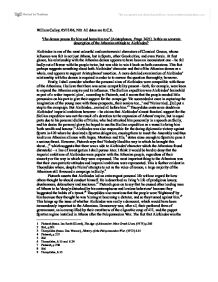 'The demos yearns for him and hates him too' (Aristophanes, Frogs 1425). Is this an accurate description of the Athenian attitude to Alcibiades?

'The demos yearns for him and hates him too' (Aristophanes, Frogs 1425). Is this an accurate description of the Athenian attitude to Alcibiades? Alcibiades is one of the most colourful and controversial characters of Classical Greece, whose influence was felt in not just Athens, but in Sparta, other Greek cities, and even Persia. At first glance, his relationship with the Athenian demos appears to have been an inconsistent one - he fell badly out of favour with the people twice, but was able to win it back on both occasions. This fact perhaps suggests something about both Alcibiades' character and that of the Athenian demos as a whole, and appears to support Aristophanes' assertion. A more detailed examination of Alcibiades' relationship with the demos is required in order to to answer the question thoroughly, however. Firstly, I shall consider whether the personal aims of Alcibiades were compatible with those of the Athenians. I believe that there was some compatibility present - both, for example, were keen to expand the Athenian empire and its influence. The Sicilian expedition was Alcibiades' brainchild as part of a wider imperial plan1, according to Plutarch, and it seems that the people needed little persuasion on his part to give ...read more.

seemed to be secondary to the desire to make him a scapegoat. It also seems that they were easily influenced by speeches given by his opponents, such as Androcles, and given to wild bursts of what can only be described as 'purging' - Plutarch claims that they 'went on...arresting and imprisoning anyone who happened to be denounced.'15 The demos, on this evidence, was a fickle entity and thus it is easy to see that it could have had a mercurial attitude towards Alcibiades even without much action on his part. However, an interesting point brought up by Malcolm McGregor is that Alcibiades' already poor reputation for drunken misconduct (Plutarch mentions such things as stealing gold cups from his admirers, cutting off his dog's tail and drinking from precious ceremonial cups as if he owned them16) and his abundance of personal enemies prejudiced the demos' view of Alcibiades and led to their sudden turning against him,17 rather than than pure fickleness: the Athenians were certainly responding to provocation. Looking at the other side of the personality issue, Alcibiades seems to have had some personal traits that were far more endearing to the people of Athens. ...read more.