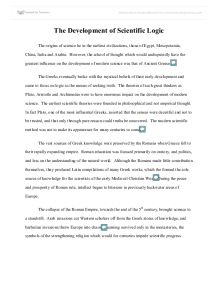 The development of scientific logic.

The Development of Scientific Logic The origins of science lie in the earliest civilizations, those of Egypt, Mesopotamia, China, India and Arabia. However, the school of thought which would undisputedly have the greatest influence on the development of modern science was that of Ancient Greece. The Greeks eventually broke with the mystical beliefs of their early development and came to focus on logic as the means of seeking truth. The theories of such great thinkers as Plato, Aristotle and Archimedes were to have enormous impact on the development of modern science. The earliest scientific theories were founded in philosophical and not empirical thought. In fact Plato, one of the most influential Greeks, asserted that the senses were deceitful and not to be trusted, and that only through pure reason could truths be uncovered. The modern scientific method was not to make its appearance for many centuries to come. The vast sources of Greek knowledge were preserved by the Romans when Greece fell to their rapidly expanding empire. Roman education was focused primarily on oratory, and politics, and less on the understanding of the natural world. Although the Romans made little contribution themselves, they produced Latin compilations of many Greek works, which the formed the sole source of knowledge for the scientists of the early Medieval Christian West. During the peace and prosperity of Roman rule, intellect began to blossom in previously backwater areas of Europe. ...read more.

Although for the time being adoption of the Aristotelian view permitted science to flourish, it the long run it would prove an impediment. Alchemy, a development of the Arabic world, sought to prolong the human life and turn base metals into gold (which Aristotle claimed was possible if the basic nature of a substance could be altered). However alchemy had too major shortfalls. First was its secretive nature; the accomplishments of one alchemist were seldom passed down. Second was a focus on qualitative rather than quantitative measurements; the alchemists obtained a large body of knowledge but formed few coherent theories to explain their discoveries. At this time, little progress had been made in biology. Rudimentary knowledge of anatomy existed, and various attempts were made at assigning the specific functions to the body's organs. The Aristotelian view of the living world, divided into man, plants and animals would remain in place until the invention of the microscope in the 17th century. The study of physics, which made up the main body of science at the time, was somewhat further advanced. The Greek had concentrated many of their efforts in the study of astronomy, optics and mechanics. Rather clumsy studies of dynamics were also added by medieval scientists. The pace of European science picked up as the Christian and Arabic worlds came into more frequent contact, largely through the Crusades. Despite the clash between the Christian and Aristotelian views, Aristotle gradually came to be accepted throughout Europe as well. ...read more.

In 1703, Isaac Newton was elected to the post of president of the society, which he held until his death. Isaac Newton was the other great giant of the Scientific Revolution. Newton laid the foundations for calculus and made great advances in the theory of optics. He is often credited with the separation of white light into its constituent colors using a prism. However, the greatest achievement of Newton's lifetime were the publication of his law of universal gravitation and its implications in physics and astronomy, proving Johannes Kepler's laws of planetary motion. Also, Newton's laws of motion, which he unified and complied from the works of Galileo, are known to every student today. The Scientific Revolution marked the permanent indoctrination of the empirical scientific method into the body of science. The modern scientific model, of scientific "facts" which can be toppled and replaced by a more suitable theory was a product of the scientific progress from to time of the revolution up to modern times. New discoveries sometimes affect entire branches of science. For example, the discovery of DNA and the science of genetics have completely transfigured biology. The modern theory of quantum mechanics took the established world of classical physics entirely by surprise. Today it is difficult to imagine a world where scientific thought is not accepted. However, the development of scientific logic has followed a long road to the current day, and science itself has yet many truths to uncover. ...read more.

This essay provides a good basic overview of the trajectory of developments in sicnece, but lacks detailed content, historiography and analysis. The student could significantly improve the essay by presenting a less teleological story and exploring points of difference and conflict, using the historiography to support a more analytical approach.
4 stars.