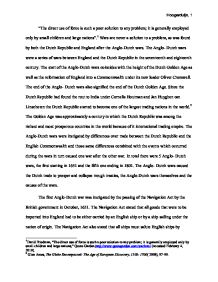 The Dutch trade during the Anglo- Dutch wars. The Anglo-Dutch wars were instigated by differences over trade between the Dutch Republic and the English Commonwealth

The fourth Anglo-Dutch war was caused by the stop of economic growth in the Dutch republic as well as the regime change in England. With the Third Anglo- Dutch war over Willem III had become stadholder in 1673 and due to religious turmoil in England, Mary became the new Queen of England under the circumstances that her husband, Willem III, would become king.15 Willem III soon started to shift the economic headquarters from Amsterdam to London, and put a large part of the Dutch fleet under English command.16 Because of these changes the economic growth of the Dutch republic came to a standstill, whereas the England soon surpassed the Dutch Republic in profits from trades making them the new master traders of Europe.17 The English surpassing the Dutch trade in the fourth Anglo- Dutch war signified the decline of the Golden Age. When Willem III died in 1703, England ceased to be ruled by a Dutch king and the Dutch Republic became a separate country. The Dutch economy continued to work poorly, and with the Dutch supporting the American War of Independence, England declared war on the Dutch Republic again in 1780. The Dutch navy, which was significantly weaker that its former self in the Third Anglo-Dutch war, was incapable of protecting the Dutch trading fleet and was easily defeated by the English and the Fourth Anglo-Dutch war ended in 1784.18 The Colonies that the English had taken over during the war were all given back to the Dutch republic after the war ended. The fourth Anglo- Dutch war shows how weak the Dutch fleet and trade had become at the beginning of the eighteenth century and the Dutch Republic was lucky to get back there colonies after the war. The Fifth Anglo-Dutch war occurred from 1795 to 1801. In 1789 the French Revolution broke out and by 1795 the Dutch republic had become part of the French empire and was from then on to be called the Batavian Republic. ...read more.