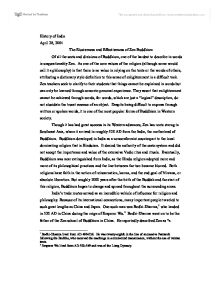 The Elusiveness and Effectiveness of Zen Buddhism.

History of India April 28, 2004 The Elusiveness and Effectiveness of Zen Buddhism Of all the sects and divisions of Buddhism, one of the hardest to describe in words is unquestionably Zen. As one of the core values of the religion (although some would call it a philosophy) is that there is no value in relying on the texts or the words of others, attributing a dictionary style definition to this sense of enlightenment is a difficult task. Zen teachers seek to clarify to their students that things cannot be explained in words but can only be learned through concrete personal experience. They assert that enlightenment cannot be achieved through words, for words, which are just a "logical" description, do not elucidate the truest essence of an object. Despite being difficult to express through written or spoken words, it is one of the most popular forms of Buddhism in Western society. Though it has had great success in its Western advances, Zen has roots strong in Southeast Asia, where it arrived in roughly 520 AD from the India, the motherland of Buddhism. Buddhism developed in India as a nonconformist counterpart to the local dominating religion that is Hinduism. It denied the authority of the caste system and did not accept the importance and value of the extensive Vedic rites and rituals. Eventually, Buddhism was near extinguished from India, as the Hindu religion adopted more and more of its philosophical practices and the line between the two became blurred. ...read more.

The medieval military men in Japan grasped Buddhism eagerly. It became a warrior creed for many, because they believed it called for action, intense self discipline and for scorn of death. Here it was mixed with small aspects of Shintoism and utilized by the Japanese as justification for their belligerent wartime activities. When one practices Zen, the objective is to reach Satori, which is described as "a sort of inner perception of Reality itself."4 It is also explained to be the world of "non-descrimination, non-differentiation, or two-ness becomes one-ness and yet equally seen as two."5 Unfortunately, little is written on how to reach this cryptically depicted state of enlightenment, but what is surely the right way to start is to restrain one's mind to the point of total control, perhaps through the employment of Dhyana. This technique enables a follower to relax the body and banish thought so that one may focus entirely on the koan practices. Two examples of koan problems are: "A sound is made by the clapping of two hands. What is the sound of one hand?" and "When the Many are reduced to the One, to what is the One to be reduced?"6 These types of questions usually involve a choice between two responses, neither of with is realistic or even possible, causing the seeker to reflect on the problem of life, according to Zen. ...read more.