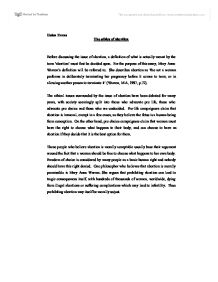 The ethics of abortion.

Helen Evans The ethics of abortion Before discussing the issue of abortion, a definition of what is actually meant by the term 'abortion' must first be decided upon. For the purpose of this essay, Mary Anne Warren's definition will be referred to. She describes abortion as 'the act a woman performs in deliberately terminating her pregnancy before it comes to term, or in allowing another person to terminate it' (Warren, M A, 1997, p.72). The ethical issues surrounded by the issue of abortion have been debated for many years, with society seemingly split into those who advocate pro life, those who advocate pro choice and those who are undecided. Pro-life campaigners claim that abortion is immoral, except in a few cases, as they believe the fetus is a human being from conception. On the other hand, pro choice campaigners claim that women must have the right to choose what happens to their body, and can choose to have an abortion if they decide that it is the best option for them. Those people who believe abortion is morally acceptable usually base their argument around the fact that a woman should be free to choose what happens to her own body. Freedom of choice is considered by many people as a basic human right and nobody should have this right denied. One philosopher who believes that abortion is morally permissible is Mary Anne Warren. She argues that prohibiting abortion can lead to tragic consequences itself, with hundreds of thousands of women, worldwide, dying from illegal abortions or suffering complications which may lead to infertility. ...read more.

Thomson's and warren's argument that a woman has the right to choose is therefore, not entirely faultless. Warren explains that in cases where a woman could have taken responsibility to avoid becoming pregnant, by taking the contraceptive pill for example, an abortion may not be morally permissible. Pro-life campaigners have argued for many years that abortion is wrong because the killing of another human being is wrong. However, before considering this argument, it would be beneficial to examine what it is that makes killing us wrong. Don Marquis puts forward the 'future like ours' argument, which states that killing someone is wrong because it deprives that person of their future and the life they would have lived if they had lived their natural life span. Marquis explains more specifically that it is the loss of a future conscious life which makes killing a person wrong, as opposed to the loss of a future biological life. Marquis also states that 'the misfortune of premature death consists of the loss to us of the future goods of consciousness' (Marquis, 1997, p.87). He describes the goods of life as the things the make life worth living and the things we have done that we are proud of. Marquis argument is that abortion is wrong because it results in premature death, which he considers morally wrong. Helen Evans There are at least four arguments, according to Marquis, which support the FLO account of the wrongness of killing. These arguments are the considered judgement argument, the worst of crimes argument, the appeal to cases argument and the analogy with animals argument. ...read more.

However, following the virtue theory may not make it any clearer as to whether abortion is morally right or not, but instead makes the claim that in some circumstances it may be. Another problem is what is actually mean by a 'virtuous act'. People may disagree about what a virtuous act is, and when one person decides it is virtuous to have an abortion, another may consider it non-virtuous in the same situation. Helen Evans Abortion is a topic that will be argued within society for many years to come. Different religions, philosophical views and moral standings will all affect a person's view on the topic. In my own opinion, it is morally acceptable for a woman to have an abortion in certain circumstances, as many people argue. In cases such as r**e, I believe that it is totally unjust not to give a woman the choice to terminate a pregnancy she had forced on her. I also agree with Warren that women have a right to choose what happens to their body, and abortion is part of that choice. To deny a person the right of freedom of choice is in itself morally unacceptable, although in certain situations it can be morally unacceptable for a woman to have an abortion. Therefore, abortion is morally acceptable if the reason behind having one is a worthy enough reason to justify the abortion. There can be no definite yes or no answer as to whether it is morally acceptable to have an abortion or not. Instead, it would appear to be based on the circumstances and the situation the woman is in, and each case of abortion should be looked at individually. ...read more.