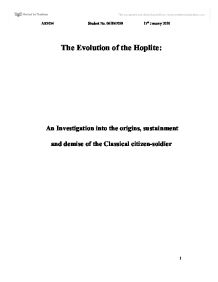 The Evolution of the Hoplite: An Investigation into the origins, sustainment and demise of the Classical citizen-soldier

The Evolution of the Hoplite: An Investigation into the origins, sustainment and demise of the Classical citizen-soldier Content: Page 1: Title Page Page 2: Contents Page Page 3: Introduction Page 4: The Origins of the Hoplite Page 8: The Social, Symbolic and Cultural representation of the Hoplite Page 14: The End of the Hoplite Page 17: Conclusion Page 18: Bibliography - Ancient Authors Page 21 Bibliography - Modern Authors Page 24: Bibliography - Author cited sources Page 25: Illustrations Introduction: The Hoplite is probably the first thing anyone envisages at the mention of warfare in the Ancient Greek world. The history of the hoplite (or the few hundred years in which hoplite warfare dominated the Aegean) is something that I find is often overlooked in terms of Ancient warfare, especially with regards to Greece's neighbours to the west, who eventually come to dominate European history for the best part of 500 years. In turn, it is no real surprise that a large share of the attention on Ancient warfare is focused on machinations from Rome, as opposed to those poleis in Greece. I would like to explore a lot more than just the history of hoplite warfare in the Hellenes. The points I would like to focus on are how and why hoplite (and phalanx) warfare originated, how much was the hoplite was engrained into Ancient Greek identity ('hoplite culture' gives an idea as to why it lasted like it did) and for what reasons did hoplite warfare (and to some extent culture) die out? The origins of the Hoplite: To at least try and establish the origins of hoplite warfare, the evidence scholars mostly rely on is vase depiction. Certainly, depictions of battle scenes were very popular in Greece (as one can see on the friezes of the Parthenon as well as the various vase decorations; Hanson, 1991: 7). It is more than likely that the arms and armour used by hoplites were already in use by the time hoplite warfare was considered to have originated around 675-50 BC (Snodgrass, 1964, passim). ...read more.

When one city state invaded another, it had to provoke conflict. In the vast majority of cases, this was done by ravaging the invaded state's farmland and agriculture. Since a great deal of a city-state's citizens were farmers, this was unthinkable and very often, the invaded city state gave battle in an effort to protect crops. In other cases, the invaded polis could refuse to give battle and let her crops be savaged and the invader would return home (Hanson, 1991: 4). For something to central to the belief of Classical Greek warfare, agricultural devastation was, in fact, quite ineffectual. Lin Foxhall cited the case of a fire on Methana, Attica in 1895 which destroyed 30-50 hectares of farmland. Out of the 104 families who owned land there, many lost a little land, but none lost any significant portion of land. The actions of an invading army trying to ravage the countryside would have been much less effective that the fire of 1895 (Foxhall, 1993: 136). Wealthy famers with larger plots on easily ravaged flat plains will have sustained most of the damage in the case of ravaging ("Xenophon"/The Old Oligarch, Const. Ath.: 2,14-16), but crucially, they did not expect their losses to be significant (SEG 24 [1969] 151.18). Sparta's (under the Peloponnesian League) invasions of Attica during the Peloponnesian War made no permanent damage to crops or any agricultural depression (Hanson, 1998: 176). The worries of farmers were mostly hot air, and actually became a target of satire in Aristophanes' plays (Hanson, 1998: 178; Artistoph., Acharnians: 182-3; 512; cf. Foxhall, 1993: 139). If a polis invaded another state's lands, and battle was not given, the only thing they knew how to do was ravage the countryside (Athens' invasion of Melos - Thuc. 3.91.2). As long as the agrarian population maintained its dominance in political and cultural terms, agricultural devastation was a constant part of Classical Greek city state hoplite warfare (cf. ...read more.

The end of his dominance came in the last years of the Peloponnesian War, when the agriculturalists monopoly over conflict vanished, along with it the confined, ritual nature of hoplite warfare (Hanson, 1991: 5). Sparta and Athens, with two vastly different societies were, ironically, both similar in that they were free from the traditional requirements of agriculture for a polis (Hanson, 1991: 5), and in turn, the regulations of hoplite battle. Sparta could rely on the helots to farm, whilst Athens could rely on imports of wheat and other foodstuffs from trade and tribute. As a result, these two superpowers of the Aegean were able to unleash a new type of warfare previously unseen in the Hellenes (Hanson, 1991: 5). Athens, under Pericles, could afford to sit back, behind the city walls whilst the Lacedaemonians invaded Attica, knowing that they could weather the storm and unleash seaborne raids on the Peloponnese, causing economic distress, and dissuading the Spartans from continuing the war (Westlake, 1945: 84; Spence, 1990: 92; Thuc. 1. 143.5). Conclusion: As we have seen, Hoplite warfare came to dominate the history of Greece for 300 years. Hoplites originated from the influx of bronze into Greek ports from abroad and the armour used by these soldiers required them to stay in a phalanx formation where they maintain their safety, yet pose a serious threat to any enemy they encountered. Gradually, this style of warfare came to be perpetuated by an agrarian elite, who could fight battles without endangering their agricultural prosperity (Hanson, 1991: 6). As the years passed, other forms of warring were found to be more effective, which ended the monopoly the agrarian elite had on forcing conflict. Despite changes in Hoplite tactics, these were too little, too late and the era of the hoplite was ended with the victory of Phillip II's Phalangites and cavalry at the Battle of Chaeronea in 338 BC. I couldn't agree much more with Victor Davis Hanson when he described Greek warfare as a "wonderful, absurd conspiracy" (1991: 6). ...read more.