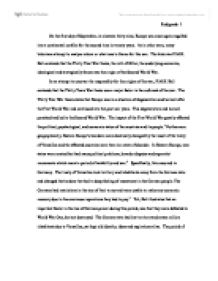 The historian P.M.H. Bell contends that the Thirty Year War thesis, the will of Hitler, the underlying economic, ideological and strategically forces was the origin of the Second World War.

On the first day of September, in nineteen thirty-nine, Europe was once again engulfed into a continental conflict for the second time in twenty years. As in other wars, many historians attempt to analyze whom or what was to blame for this war. The historian P.M.H. Bell contends that the Thirty Year War thesis, the will of Hitler, the underlying economic, ideological and strategically forces was the origin of the Second World War. In an attempt to uncover the responsibly for the origins of the war, P.M.H. Bell contends that the Thirty Years War thesis was a major factor in the outbreak of the war. The Thirty Year War thesis states that Europe was in a situation of degeneration and turmoil after the First World War and continued into the post war years. This degeneration and turmoil persisted and led to the Second World War. The impact of the First World War greatly affected the political, psychological, and economic status of the countries and its people.1 Furthermore geographically, Eastern Europe's boarders were drastically changed by the result of the treaty of Versailles and the affected countries were then in a state of disorder. In Eastern Europe, new states were created but had many political problems, boarder disputes and separatist movements which meant a period of instability and war.2 Specifically, this occurred in Germany. ...read more.

This led to the policy of appeasement. Bell explains that Britain depended a great deal on imports and exports for economic revenue. However, with a new conflict, the import bill would increase and their economic position will be severely damaged similar as the First World War.13 Due to the sizeable markets and demand for British goods in Germany, an economically favorable situation for Britain, forced Britain to maintain good relations with Germany and avoid a war with her. Thus, the economic state and interests of Britain deeply profited from the trade with Germany and the peace. During this period, the French and the Soviets were in a similar economic situation as Britain. Regardless that the French depended less on international trade then did Britain, German industry was far superior compared to the French. The French believed that with the increased passage of time, their industry would catch up with the German's and would give time for an economic recovery.14 Therefore, the economic interests of France also benefited from peace. Although the Soviet's economy was in rapid growth, Bell explains that the Soviets had the most to benefit from the peace. Their industry and economy still left much to be desired in the late nineteen thirties compared to that of the German and growth in the iron and steel industries were extremely slow. ...read more.