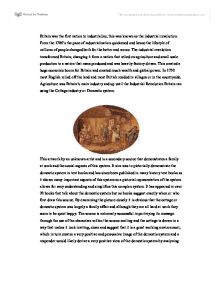 Britain was the first nation to industrialize; this was known as the industrial revolution. From the 1780's the pace of industrialization quickened and hence the lifestyle of millions of people changed both for the better and worse. The industrial revolution transformed Britain; changing it from a nation that relied on agriculture and small scale production to a nation that mass produced and was heavily factory driven. This created a huge economic boom for Britain and created much wealth and global power. In 1750 most English relied off the land and most British resided in villages or in the countryside. Agriculture was Britain's main industry and up until the Industrial Revolution Britain ran using the Cottage industry or Domestic system. This artwork by an unknown artist and is a secondary source that demonstrates a family at work and the social aspects of this system. It aim was to pictorially demonstrate the domestic system in text books and has since been published in many history text books as it shows many important aspects of this system as a pictorial representation of the system allows for easy understanding and simplifies this complex system. It has appeared in over 20 books that talk about the domestic system but no books suggest exactly when or who first draw this source. By examining the picture closely it is obvious that the cottage or domestic system was largely a family affair and although they are all hard at work they seem to be quiet happy. The source is extremely successful in portraying its message through the use of the characters within the source smiling and the cottage is drawn in a way that makes it look inviting, clean and suggest that it is a great working environment, which in turn creates a very positive and persuasive image of the domestic system and a responder would likely derive a very positive view of the domestic system by analyzing this picture. ...read more.

It is a valid source as it shows the misery that the workers so often endured within factories and although it only shows the factory system from one perspective and is bias, this view of the factory system is widely supported by present historians as there are many other primary sources like this one from the Georgian period that portray the factory system in such a negative way. This picture, in comparison to that of the domestic system is significantly darker and portrays the vast difference in lifestyle between the domestic system and factory system and shows the class division between the rich factory owners and poor workers. The source infers that the industrial revolution and the factory system benefited the rich but neglected the poor; Only making the rich richer and the poor poorer. From this source it is possible to tell the standard of living for many people and social and economical implications of the Industrial Revolution. Although it only deals with factory life and not the entire industrial revolution, the source portrays that factory life was extremely hard. An unknown factory worker not unlike one that is depicted in the source said this about factory workers and owners, "stunted, diseased, deformed, degraded, each with the tale of his wronged life, they pass across the stage, a living picture of man's cruelty to man, a pitiless indictment of those rulers who in their days of unabated power had abandoned the weak to the rapacity of the strong". When people came from the countryside to the cities seeking work they found that conditions were vastly different from those they had worked and lived in, in their villages and cottages. The old freedom they had enjoyed was no more. The streets were filthy, unlit and sewage systems were primitive. Housing for factory workers like those in the source was cramped and often unhygienic. Such poor living conditions along with poor working conditions is thought to have had devastating effects on workers health as shown by the sickly looking workers depicted in the source. ...read more.

Mine shaft collapses, methane explosions and various other accidents happened on a regular basis in these mines and like the factory owners, mine owners cared little about the workers welfare and many felt that the death of workers was an acceptable cost for efficient production. However although this source paints a rather morbid picture of the industrial revolution, this wasn't entirely the case. This source is a very powerful and informing source that would be considered extremely valuable but not entirely accurate as although factory workers did have an extremely rough and hard lifestyle, as shown in this source , the source doesn't show how the industrial revolution helped many. The industrial revolution saw a triumph and emergence of the middle class and ordinary working people had an increased opportunity to seek employment in the booming factory, mining and mill industrials. Also upon comparing both sources it is clear that they have several faults that don't match statistics or cold facts. In the first source the health of the workers is portrayed to be fine and they workers seem happy, yet in the factory system source the workers look terribly sick. But statistics suggests that during the industrial revolution the death rate fall from 74.8% in 1730 to 31.8% in 1810 which is due to the economic boom of the revolution which saw medical treatments and techniques improve. However at the same time statistic suggests that the life expectancy of a factory worker compared to a countryside farmer during the industrial revolution was around 15 years shorter, which also suggests that working in a factory was bad for your health which supports the source. But regardless of both sources various faults they have proven themselves to be helpful and reliable. If so many historians and authors have used these sources then they are obviously considered by many to be valuable and accurate accounts of the social effects of the industrial revolution. ...read more.