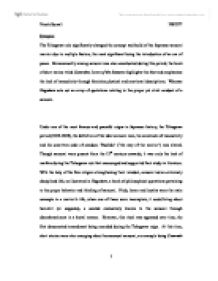 Synopsis The Tokugawa rule significantly changed the concept and build of the Japanese samurai warrior due to multiple factors, the most significant being the introduction of an era of peace. Homosexuality among samurai was also accentuated during this period; the book of short stories titled Comrades Loves of the Samurai highlights this fact and emphasizes the lack of masculinity through feminine physical and emotional descriptions. Whereas Hagakure sets out an array of quotations relating to the proper yet strict conduct of a samurai. Under one of the most famous and peaceful reigns in Japanese history, the Tokugawa period (1600-1868), the definition of the ideal samurai man, his constructs of masculinity and his unwritten code of conduct, 'Bushido' ('the way of the warrior') was altered. Though samurai were present from the 12th century onwards, it was only the lack of warfare during the Tokugawa rule that encouraged and supported their study in literature. With the help of the Zen religion strengthening their mindset, samurai led an extremely disciplined life, as illustrated in Hagakure, a book of philosophical quotations pertaining to the proper behavior and thinking of samurai. Pride, honor and loyalty were the main concepts in a warrior's life, when one of these were incomplete, it could bring about hara-kiri (or seppuku), a suicide exclusively known to the samurai through disembowelment in a brutal manner. ...read more.

It seems that with the Tokugawa government a deeper sense of sensitivity and compassion arrived; which most probably resulted from the prolonged peace after long periods of combat. The Buddhist-related religion of Zen helped to shape samurai ideals, supporting and facilitating the samurai mindset; being a religion of the will, it upheld intuition over intellect, teaching to never look back and to treat life and death with indifference (Suzuki, D.T., 1959, p.61). The emphasis on looking forwards without distraction was suitable for samurai as they needed focus in order to defeat their enemies successfully without wavering. "Japanese genius went either to priesthood or to soldiery. The spiritual co-operation of the two professions could not help but contribute to the creation of...Bushido," (Suzuki, D.T., 1959, p.69). It was believed that violence, an act of masculinity, was acceptable as it was necessary for the samurai to sustain his power (Ikegami, E., 1995, p.34). Zen taught samurai to be honorable and disciplined, explaining that the sword is a "symbol of loyalty and self-sacrifice...identified with the annihilation of things that lie in the way of peace, justice, progress and humanity...our own greed, anger and folly" (Suzuki, D.T., 1959, pp.89-90). Hagakure recounted stories in order to give guidance to samurai. Therefore Zen shared the same ideals explained in Hagakure, and gave the samurai a sense of courage accompanied with mental strength to accomplish his duty. ...read more.

The increase in contact between samurai would have strengthened their relationship and hence, their feelings for one another. It is believed that homosexuality was heightened due to kabuki mono, which essentially means 'crooked person' who were typically samurai with no masters, and who had formed street gangs at the beginning of the Tokugawa reign. These kabuki mono youths usually defended their peers against people of higher authority; this relationship involving loyalty and trust most likely would have played as part of a catalyst for samurai homosexuality (Ikegami, E., 1995, pp.205-209). Therefore, it is clearly established that during the Tokugawa reign there was a significant shift in the masculinity of samurai, this can be seen through the comparison of old-fashioned texts such as Hagakure and satirical pieces such as Comrade Loves of the Samurai. Previous expectations were altered to suit the change in the warfare environment; with the Tokugawa government appeared peace and prosperity. An increase in living standards and luxury goods was enjoyed by all and heightened the appreciation of life. No longer was there felt to be a need for such brutal acts like hara-kiri, and without war there was no necessity for honor and loyalty. A new interest in the arts such as literature and poetry softened the hardened emotions of samurai; possibly allowing them to express their feelings more openly. However, because the majority of their time was spent among other samurai, these feelings were communicated towards their comrades. All these factors contributed to the transformation in samurai masculinity and the lack of integration with Bushido. ...read more.