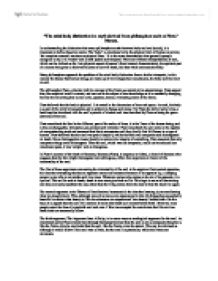 &quot;The mind body distinction is a myth derived from philosophers such as Plato

"The mind body distinction is a myth derived from philosophers such as Plato." Discuss. In understanding the distinction that many philosophers make between body and soul (mind), it is important to define these key terms. The 'body' is considered to be the physical form of human or animal, 'the complete material structure or physical form.' It is the outer characteristic that generally people recognise us by; it is 'matter' and is both spatial and temporal. There are different interpretations of soul, which can be defined as the 'non physical aspect of person' (their internal characteristics), the spiritual part of a human being that is believed by some to survive death, and that which animates the body. Many philosophers approach the problem of the mind body distinction from a dualist viewpoint, in this context the theory that human beings are made up of two independent constituents, the body and the mind or soul. The philosopher Plato, a dualist, held his concept of the Forms as central to his epistemology. Plato argued that, the empirical world is unreal, and can not be the object of true knowledge as it is constantly changing, but that the only thing that is real is the, separate, eternal, everlasting realm of the forms. ...read more.

Perhaps the key idea of Aristotle's view of the body/soul distinction is that of soul being an organising principal which animates the body (including animals). Aristotle concluded that to be alive the body needs the soul; and the soul needs the body. The two are inseparable. The views of St Augustine see the fusion of Platonism and Christianity 'If the Platonists could have had this life over with us...they would have become Christians, with the change of words and statements." However, Augustine, predominantly a dualist, was sceptical about some aspects of Platonism, namely Plato's belief in learning as a type of remembrance and thus he rejected any idea of the pre-existence of the soul. Augustine, in his earlier writings, reiterated Plato's general idea of the body, considering it to be a "cage" for the soul. Augustine's embarrassment with the body could perhaps be due to his membership of a fringe Christian sect (The Manichees) who regarded the lower half of the body as the work of the devil as a young man, this aversion to the body is commonplace in some of the early Church despite it not following with its Jewish roots. Augustine was also influenced by the neo-Platonist Plotinus, who believed that the soul is superior to the body as it could exist independently to the body. ...read more.

Rather than being enfleshed souls, Dawkins believes that there is simply no such thing as a soul 'there is no spirit driven life force....life is just bytes and bytes of digital information' Dawkins River out of Eden. Dawkins view, rather depressingly, is that living creatures are nothing more than 'survival machines' with a program to replicate. It could be argued here that this replaces the spiritual concept of the soul with a more modern myth as. It could be said that the evolutionary drive to 'propagate the digital database that did the programming' could be called the life force that drives the universe; Aquinas might simply add the phrase 'this is what everyone understands to be God'. The body-soul distinction was first "formulated as philosophical doctrine in ancient Greece" it was "baptised into Christianity, ran through the medieval period, and entered the modern world with the public status of a self-evident truth" when it was refined by Descartes in the 17th century. "Since World War 2, however the Cartesian mind-matter dualism, having been taken for granted for many centuries, has been strongly criticised" (John Hick). However whilst, the mind body distinction, first doctrined by Plato and revised by Descartes has been widely criticised in modern times, it can be claimed that it is no more a myth than the theories of the likes of Hick and Dawkins, that have attempted to displace it. ...read more.